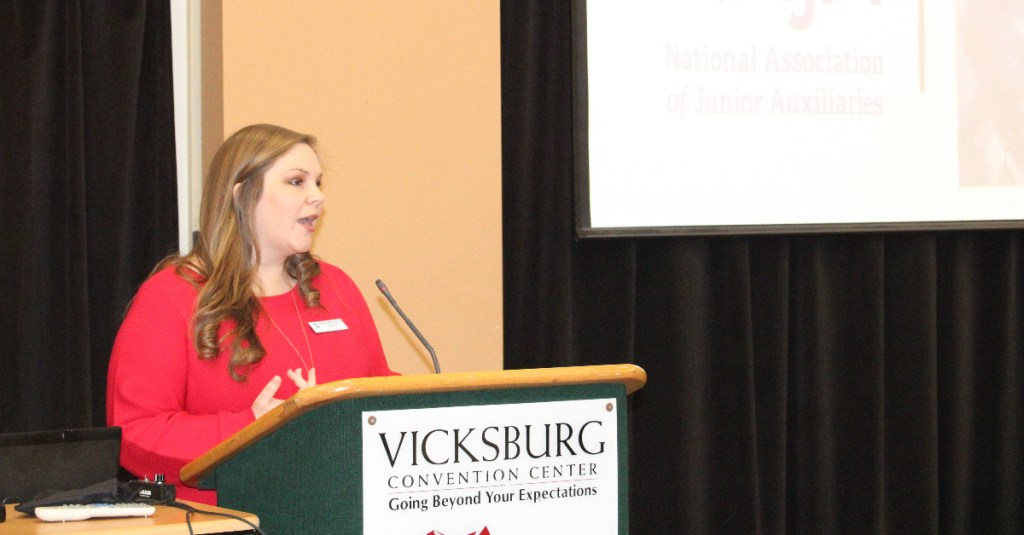 Mary Margaret Edney discusses the history of the Junior Auxiliary during the Vicksburg Convention Center's Taste of Vicksburg series in connection with the convention center's 25th anniversary. The programs feature information about Vicksburg and participants get to sample dishes made by the center's caterers. (Photo by John Surratt | The Vicksburg Post)

A Taste of Vicksburg kicked off Friday with a presentation on the history of the Junior Auxiliary by Mary Margaret Edney as part of the convention center’s observance of its 25th anniversary.

“We couldn’t celebrate our 25th anniversary without including the city,” she said. “There’s more to Vicksburg than the Civil War; there’s its arts, history and culture. We want to tell people about those other things.”

During the yearlong event, the convention center will present a monthly program highlighting a topic targeting the city. Programs will include the influence of Black culture on the city, concerts, the city’s history, its news media and Vicksburg residents who have distinguished themselves.

Mary Margaret Edney kicked off the series of programs with a presentation on the Vicksburg chapter of the Junior Auxiliary, which is approaching its 87th anniversary. The program focused on the organization,  its service to Vicksburg and “what that service has looked like over almost nine decades and what our group has meant to the community; particularly underprivileged kids in Vicksburg.”

Besides the programs, people attending the events will be able to sample new dishes prepared by the convention center’s caterer, Seaznd Dreams, operated by Angie Presley and Dana Kenny.

“These will be new dishes we will be adding to our menu,” Southard said. “The people attending the programs will be the first to try them.

“The programs will be held the last Friday of the month except for March; I have every month secured but August (for a program),” Southard said.

Other events include the Feb. 12 Jester’s Ball Mardi Gras ball and the Sunset Concert series March 18 and 25, and April 1 and 7 at the convention center.

“March 18 is the Vicksburg Orchestral Society’s brass quintet and March 25 is Tony Davenport, a visual artist who will paint a picture while there is live music performing behind him,” Southard said. “Patrick Smith is April 1 and then a jazz ensemble April 7. And we will have Ritz on the River.”