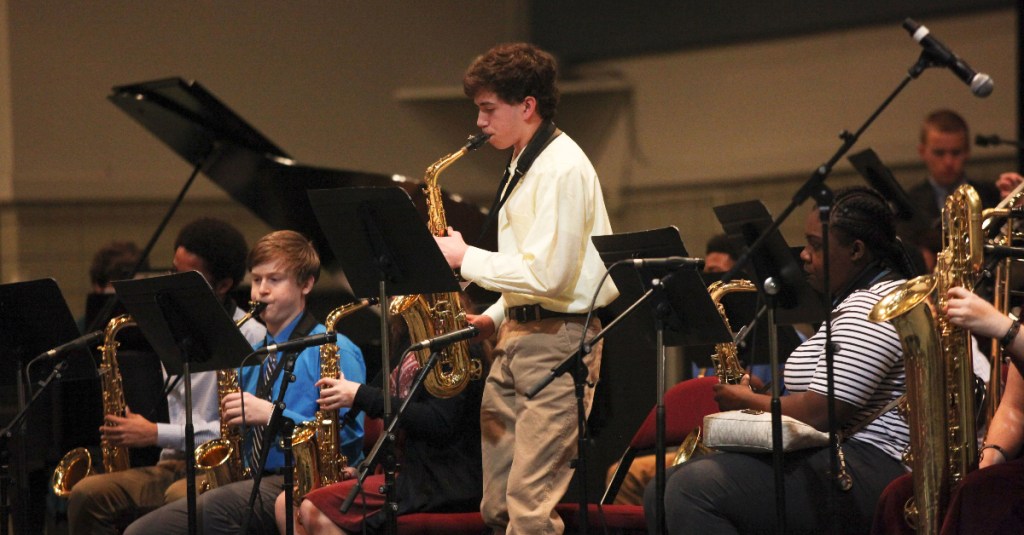 A member of Warren Central's jazz band plays a solo as the band performs at the 2019 Alcorn State University Jazz Festival in Vicksburg. After delays caused by COVID-19, Alcorn's 40th festival will close Saturday with a concert by jazz pianist Kenny Barron at the Vicksburg Convention Center. (File photo | The Vicksburg Post)

“Saturday will be the finale of the 40th anniversary (of the festival),” said Dave Miller, professor of music at Alcorn and Jazz Festival director. He said Barron will hold a workshop Friday on the Alcorn campus.

“It’s going to be a great concert,” Miller said. “I’ve wanted to get Kenny Barron for a long time. He was actually at the very first Alcorn Jazz Festival with a group called the Rutgers Jazz Professors because he was teaching at Rutgers at the time. I wanted to have him come back and complete that circle of somebody from the first festival. He’s a great player.”

The concert is free.

The workshop and the concert are the culmination of Miller’s and the school’s efforts to hold the 40th festival, which was initially postponed in April 2020 because of COVID-19.

“I tried to do it in October of 2020 and couldn’t do it, and then in April ’21 and I did two days last April and then tried again in October and then November and now February to get the last part done,” he said.

When he learned he could get Barron, Miller said, he was able to schedule the performance.

“It’s going to be a huge relief to get that festival done and then I can turn around and start planning the 41st which is this April, 7 through 9,” he said.

A native of Philadelphia, Pa., Barron started playing music professionally when he was still in high school.

When he was 19, he moved to New York City and later played for five years with Dizzy Gillespie and later with Freddie Hubbard, Stanley Turrentine, Milt Jackson, Buddy Rich and Stan Getz.

He received a bachelor’s degree in music from Empire State College and later joined the faculty at Rutgers University, a professor of music, where he taught until 2000. In 2010, he was honored by The National Endowment for the Arts as a 2010 jazz master. His recordings have received 12 Grammy nominations and his group, the Kenny Barron Trio, has received one nomination.