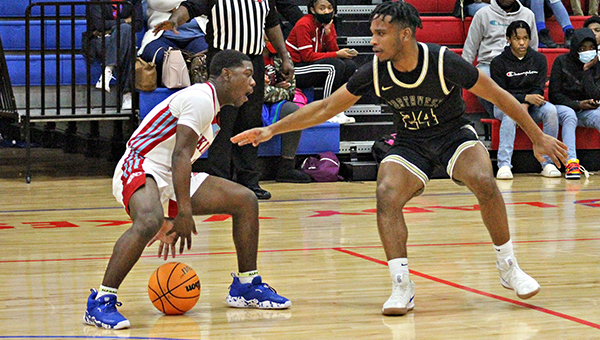 The same turnover bug that has been nibbling at the heels of St. Aloysius took a big bite out of them at exactly the wrong time.

The Flashes committed seven of their 19 turnovers in the third quarter Tuesday, allowing Copiah Academy to blow open a close game and roll to a 77-55 victory in the first round of the MAIS District 3-5A tournament.

Copiah advanced to play Madison-St. Joseph on Thursday night, while St. Al had its season end with the elimination-game loss.

John Mackey Jenkins finished with a game-high 25 points for Copiah Academy. Kamron Phillips scored nine of his 17 points in the decisive third quarter, when the Colonels outscored St. Al 26-13. The surge turned a 39-33 margin at halftime into a 65-46 rout by the end of the period.

Lazaveon Sylvester led St. Al with 24 points, while Padre Gray scored 12. The Flashes went 19-for-34 at the free throw line in the game.

“I’m just looking forward to the offseason and getting our players better. I’m proud of my guys,” said St. Al coach Anthony Lumpkin, who finished his first season with the team.

Caleb McCoy added 11 points and Giles Boyd had eight for Northwest Rankin, which rotated in several different five-man lineups throughout the second half and had 10 players score.

Warren Central started the second half with a 9-1 run to cut an 11-point halftime deficit to three, but never got closer. Northwest Rankin answered that run with a quick burst to go back up by nine, and led 44-32 after a 3-pointer by John Collins with three seconds left in the third quarter.

Warren Central made another run late, cutting it to 53-46 on a 3-pointer by Gaylon Turner with 14 seconds to go, and then ran out of time.

“Every time we made a run, we couldn’t make free throws and we made unforced turnovers,” Warren Central coach Keith Williams said. “I’m not going to say it’s inexperience or whatever. We’ve just got to get better. We didn’t quit. We’ve got to get better.”

“Our mind needs to get fixed on Terry,” Williams said. “We’ve got to go in there and do things they say we can’t do. I believe in those guys. We’ve made tremendous steps.”