Ole Miss star Ruffin out for the season with knee injury 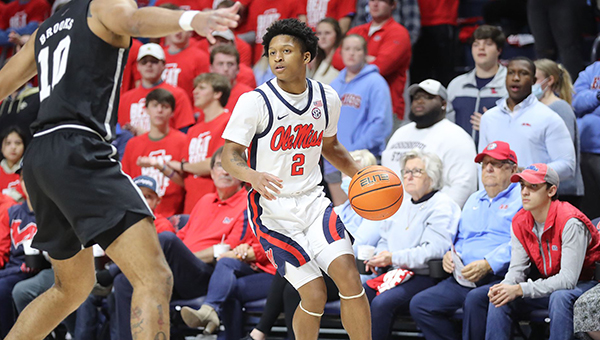 Ole Miss guard Daeshun Ruffin, the reigning SEC Freshman of the Week, will miss the rest of the season after suffering a knee injury in Tuesday's win over LSU. (Ole Miss Athletics)

OXFORD — One of Ole Miss’ most promising young players is done for the season.

Ole Miss announced Wednesday that freshman guard Daeshun Ruffin will miss the rest of the 2021-22 season after suffering a knee injury that will require surgery.

Ruffin was injured late in the Rebels’ 76-72 over No. 25 LSU on Tuesday, after leading Ole Miss with 19 points. He left the game with 12 minutes left and did not return.

“Daeshun was just hitting his stride and was establishing himself as one of the best point guards in the SEC,” Ole Miss head coach Kermit Davis said. “I feel badly for Daeshun, but I know he will attack rehab with a great maturity and will return stronger than ever next season.”

Ruffin has been electric since returning to the team following an eight-game absence due to a broken right hand suffered in the season opener against New Orleans on Nov. 9.

Ruffin averaged a team-high 2.3 steals per game and is averagined 12.6 points, 3.4 assists and 1.5 rebounds per game.

The former Callaway High School star has scored in double-digits in 10 of the 14 games he played, scored 15 or more in six contests, and has had multiple steals in nine games.