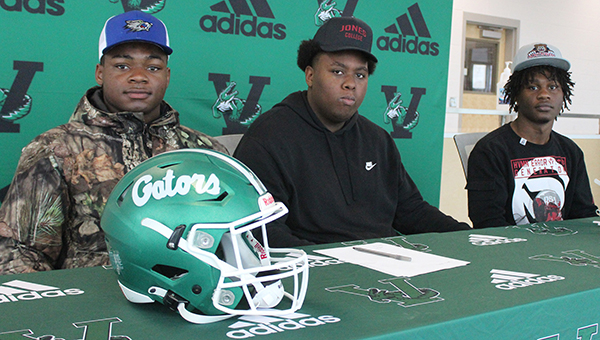 When the 2023 recruiting cycle heats up and national signing day rolls around, Vicksburg High is expected to flood the college football world with talent.In 2022, they went for quality over quantity.

Robinson signed with Copiah-Lincoln, Williams with Jones College, and Wesley with Southwest Mississippi.

The trio represented a sizable chunk of the eight-person senior class that helped the Gators to their first playoff victory in 13 years.

“I’m super proud of these young men. They came in every day during the spring and during the summer, they led the football team during those times, and during the season they were leaders on and off the field,” Vicksburg coach Todd McDaniel said. “I can’t say enough about them. They exemplify what we want Gators to be.”

Robinson and Wesley were key players on a defense that posted four shutouts and held 10 of their 12 opponents to 14 points or less.

Robinson was the 2021 Vicksburg Post Defensive Player of the Year after leading the team with 125 tackles. He also had 13 tackles for loss, four sacks and six forced fumbles, and was a first-team Mississippi Association of Coaches Class 5A all-state selection.

Robinson said he picked Co-Lin because of its campus atmosphere.

“It’s amazing to have the opportunity to go play ball at the next level,” he said. “It fit me because it’s close to home and I’m a home guy. I’m a country boy, so the environment fit me well.”

Wesley had 75 tackles and six tackles for loss in 2021. He also received a scholarship offer from Mississippi Delta, but picked Southwest Mississippi instead.

“I feel like it was the best place for me, and how I play,” Wesley said. “I like the surroundings. It’s just a good place to be.”

Williams, meanwhile, was a driving force for a Vicksburg offense that averaged nearly 300 rushing yards per game. The left tackle was a second-team Class 5A All-State selection by the Mississippi Association of Coaches.

“I’m proud of myself,” Williams said of his accomplishments.

McDaniel was proud of all of his players. He said a few more of his seniors could sign in the coming days as small-school offers shake out. And then the next two classes are loaded with talented players, many of whom have been starting for the past two seasons and some of whom are already receiving Division I offers.

On Wednesday, junior defensive lineman Caleb Bryant announced on Twitter that he had received an offer from Mississippi State.

“We want to sign 10 to 11 every year. We’re getting the program on track to where we can possibly do that. Once we do that, you’ll see more wins in the win column and better transcripts,” McDaniel said. “Hopefully our young kids see our older kids striving to be better and everything will work out for everyone.”