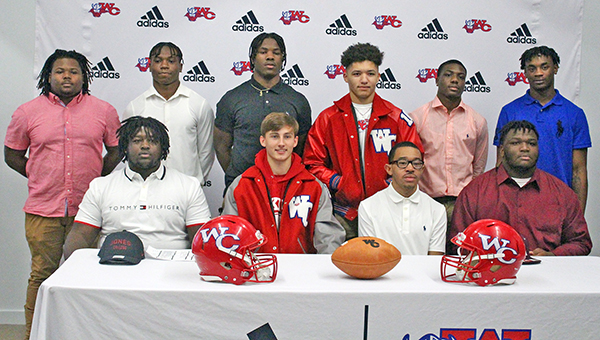 When it was his turn to take a photo, nearly two dozen family members and friends surrounded Warren Central defensive back Jaevian Mims to share in the moment.

When the Vikings’ 2022 signing class gathered for a group photo, the room was only slightly less crowded.

Eleven members of Warren Central’s football program gathered in the school’s fieldhouse on Wednesday, national signing day, to celebrate their decisions. All 11 are headed to junior college programs, and the number represents nearly a third of the 28 seniors on the roster.

“It’s a really good class, going to good schools, good programs,” Warren Central head coach Josh Morgan said. “Especially with it still being a COVID year, the numbers were hard. So this is an impressive group, an impressive number being signed, and I’m really proud of them and excited about their future.”

The 10 players and one manager spread their decisions across five Mississippi junior colleges. East Central, Mississippi Delta and Jones College landed three apiece, while Hinds and Coahoma got one each.

Offensive lineman Dontavius Bell, a first-team Class 6A all-state selection by the Mississippi Association of Coaches, stayed the closest to home by signing with Hinds.

Although he was elated to get a chance to keep playing football, Bell said he was most excited about the opportunity to continue his education.

“They’ve got a good business program that I’d like to get into,” Bell said. “Academics is way more important to me than football. I like the game of football, but I’ve got to get the academics first.”

Defensive end Jashun Simon signed with Coahoma Community College, and the rest of Warren Central’s Class of 2022 clustered together at several schools.

Mims, defensive back Jason Williams and linebacker Floyd Davenport are all headed to Mississippi Delta. Williams and Davenport were recruited as preferred walk-ons, which means they are guaranteed a roster spot but not a scholarship.

“Jones has always been there with me,” said Miller, who was a first-team all-state selection. “I didn’t think I was going to get an offer at first, but Jones called me and they offered me. It really kept me going and made me want to finish more in my senior year.”

Gilliam and Thompson were both second-team all-state selections. Thompson rushed for 1,055 yards and 10 touchdowns, while Gilliam made 7 of 8 field goals, and 25 of 26 PAT attempts.

Lynch had a breakout season. He led the Vikings with 34 receptions for 534 yards, and caught three touchdown passes. He caught 11 passes for 94 yards in 2020 and had no college offers until after the 2021 season ended.

“I knew it was one of my dreams. I knew I wanted to go play college football and I knew I had to work for it,” said Lynch, who is 6-foot-5 and 185 pounds. “I was real small and I had to get bigger and I did, and a breakout season happens.”

Morgan called the program’s signing class “impressive,” and not just because they’re his players. He noted that the rise of the transfer portal and an extra year of eligibility granted college players in 2020 because of the COVID-19 pandemic have limited scholarship opportunities for high school players.

Having 10 come from one team, he said, was something to be proud of.

“These things are extremely hard to come by. With the transfer portal, with everybody getting a COVID year, it slows things down. People aren’t leaving college because they’re getting another year, so that makes it a logjam back in high schools,” Morgan said. “It’s a really big honor, now moreso than ever. To be able to sign this amount of guys is really an impressive feat.”