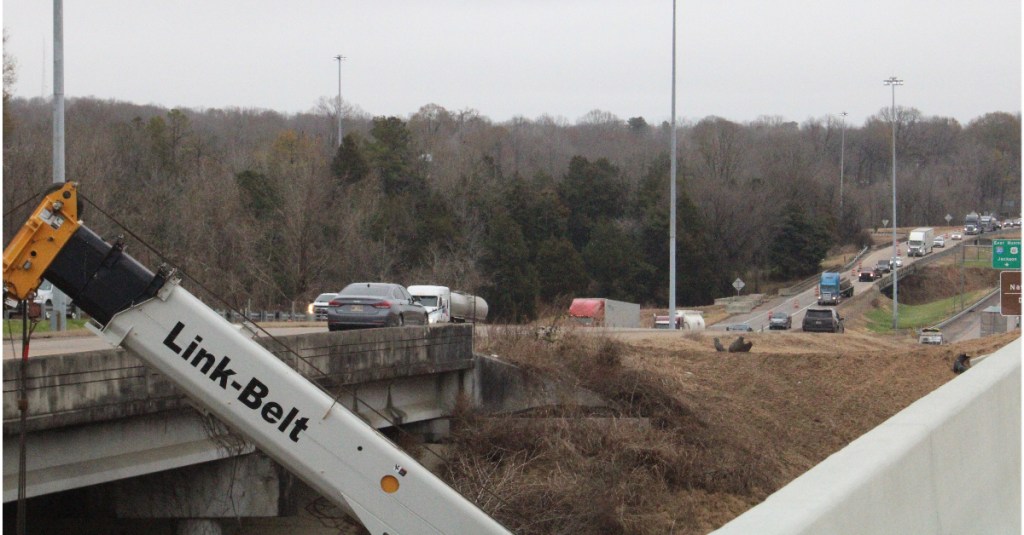 Westbound traffic begins backing up as it moves to one lane near construction on the I-20 bridge crossing Old Highway 27 near where the Mississippi Department of Transportation is making repairs. (Photo by John Surratt | The Vicksburg Post)

The Mississippi Department of Transportation began work Monday on a bridge crossing Old Highway 27 as part of a major project to repair and improve the five bridges crossing Interstate 20.

Crews began working on the bridge crossing Old Highway 27 Monday morning, closing off the two westbound Clay Street entrance ramps and reducing traffic to one lane for the duration of the project. The move caused westbound traffic to back up, at times as far back as Bovina.

MDOT spokesman Mike Flood said he did not have a specific timetable when the current project will be completed but said it would take “several months.”

“Once we complete the westbound side we’ll start on the eastbound side,” Flood said.

He said MDOT officials would continue to monitor traffic during the work on the westbound side.

Flood said “wide load” traffic and other trucks passing through the area caused the initial traffic problems, and MDOT crews were installing signs that should help alleviate the problem by having the trucks take another exit.

“A lot of folks that work in Jackson will be advised to get off at Bovina and come down Highway 80; that may help with some of that,” he said. If the problems continue, he said, MDOT will take other steps to reduce traffic, including warnings through social media.

MDOT in 2020 announced plans to improve the five bridges, or overpasses, on I-20 in Vicksburg. The project will be completed in the spring of 2023.