Despite No. 3 seed, Missy Gators still the team to beat in Region 4-5A 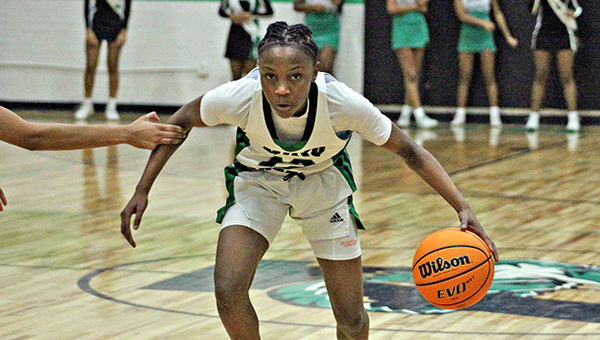 The Vicksburg Missy Gators lost their regular-season finale and are the No. 3 seed entering the Region 4-5A girls basketball tournament.

All of that, though, comes with a big asterisk that coach Troy Stewart is happy to point out.

Vicksburg has not lost a league game on the court in two years. It slid to third place because of a couple of COVID-19 forfeits, and appears to be the overwhelming favorite to win its third consecutive championship when the region tournament begins Tuesday at Jim Hill High School in Jackson.

“We are sitting third without an actual loss on our record,” Stewart said. “I don’t even think we’re lurking. I’m not saying we’re a superstar team, but we’re third by default. We will find out if we’re where we should have been, but I think we’re the class of the district.”

Vicksburg (18-7) will play Callaway (11-13) Tuesday at 6 p.m. in the first round. The winner advances to the championship game on Friday and is guaranteed a spot in the MHSAA Class 5A state tournament.

Vicksburg’s two region losses this season, officially, came at the hands of Callaway. Both were COVID forfeits, however, and the teams did not actually play each other. The Missy Gators’ four region wins were all by double digits.

The COVID situation has led to a series of starts and stops throughout January that have disrupted the team’s rhythm.

Vicksburg lost 69-62 in its regular-season finale against Clinton — itself a Class 6A championship contender — on Feb. 1, which Stewart said gave him an idea of what needed to be done in the week leading up to the next game. Simply putting in some work seemed to be the biggest thing, he said.

“My first unit has not been on the floor for more than six or seven minutes in a month. I know they’re dog tired. We have to get back to conditioning,” Stewart said.

Vicksburg’s boys’ team, meanwhile, will have a harder path through the postseason.

Like their female counterparts, the Gators were shuffled down the standings because of COVID forfeits. They wound up in fourth place, and will have to face fifth-seeded Jim Hill (12-12) in a play-in game Monday at 7:30 p.m.

The winner of the play-in game advances to the main draw — the winner plays either Callaway or Forest Hill on Tuesday night — which means the Gators (9-16) need to win twice instead of once to qualify for the state tournament.

“We didn’t even play Callaway at all. We took four forfeits. That was tough, because when we started to play well we were quarantined,” Vicksburg boys coach Kelvin Carter said. “This has been a hellacious season. In my five years as a head coach this has been the toughest season by far.”

Vicksburg beat Jim Hill 53-37 on the road on Jan. 28, so it should have some confidence heading into the rematch. A bigger concern is getting off the roller coaster the team has ridden all season and onto a more even keel for the most important game — or games — of the year.

The Gators only have one senior on the varsity roster and have endured the growing pains expected of a young team. They’re 3-9 in the last 12 games they’ve actually played. Carter was optimistic, though, that they can keep the season going for at least another week.

“My guys are playing hard. I really think they’re starting to believe and buy in, and that’s really important,” Carter said. “We’re just going to strap up and let the chips fall where they may.”