Vikings trying to climb the ladder in Region 6-6A 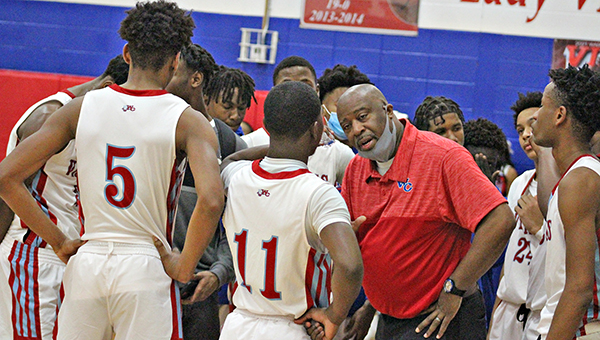 There has been a sharp divide between the top and bottom halves of Region 6-6A’s boys basketball standings this season.

To get where it wants to go, Warren Central needs to find a way to climb from one level to the other.

The Vikings (7-14) will take on host school Terry (16-7) in the first round of the Region 6-6A tournament Tuesday at 7:30 p.m. It’s a tough draw for a team that has struggled to find its footing all season long, but still an opportunity to advance to the MHSAA Class 6A tournament with a victory.

“They’re a handful,” Warren Central coach Keith Williams said. “We’ve just got to believe — believe that we can play with them, and everything will be OK. We know what we’re going up against.”

Indeed they do. Warren Central’s first meeting with Terry turned into a forfeit loss because of COVID-19 issues, and then the Bulldogs won 54-37 when they did play Jan. 25 at Terry.

Warren Central cut a double-digit halftime deficit to six in that game, but couldn’t get over the hump. Despite the loss, the game gave the Vikings a good idea of what they’re up against, Williams said.

“We played them OK — for about a quarter and a half,” Williams said with a chuckle. “We’ve been battle-tested, so we shouldn’t be afraid of them. It’s the playoffs now. It’s 0-0 and anything can happen. It’s all about how the ball bounces.”

The good news for the Vikings is that they only need to win one out of two games to advance to the state tournament. The winners of the first-round region tournament games are guaranteed a spot, while the losers will play an elimination game on Thursday.

Top-seeded Northwest Rankin (18-7) plays Pearl (5-15) in the other first-round game. Warren Central lost to Northwest Rankin 53-46 in its regular-season finale on Feb. 1, but beat Pearl twice.

Like many coaches this time of year, Williams said how far the Vikings go in the postseason will boil down to how well they show up with the season on the line.

“I feel like if we’re doing what we’re supposed to be doing, we can play with anybody. To me, it’s more of a mindset,” Williams said. “We’re playing three ninth-graders and a lot of 10th-graders. But this is 6A basketball. This is the SEC of (high school) basketball. However the chips fall, that’s where they fall, but I want people to know that we’re not afraid. We’re going to play. We’re going to scrap.”

Northwest Rankin won 52-36 when the teams played in Vicksburg on Feb. 1, to hand the Lady Vikes their second loss in three games. Warren Central had two COVID forfeits before that, so it will enter the postseason officially having lost five of its seven games in 2022.

Despite the slump, the Lady Vikes and Pearl are the only two teams in the tournament with an overall winning record.

The other first-round game features Pearl (15-8) vs. Terry (8-14) on Tuesday night. The first-round losers will play an elimination game Thursday at 6 p.m., and the winners advance to the championship game Friday at 6 p.m.

The top three finishers in the region tournament advance to the Class 6A state tournament that begins Feb. 14.