‘Me and God’: Vicksburg woman honored for rescuing elderly women from fire 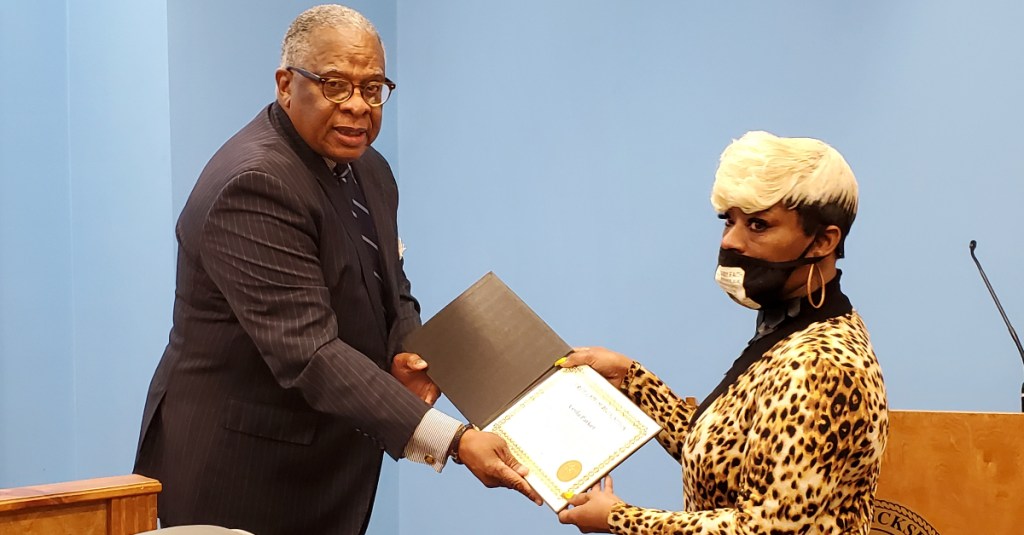 Mayor George Flaggs Jr. gives Ceola Parker a certificate of recognition from the city honoring her efforts to save elderly residents after their home on Speed Street caught fire Friday morning. (Photo by John Surratt | The Vicksburg Post)

“I was scared; I thought they were going to die,” she said.

Because of her quick actions, that didn’t happen.

Parker called the fire into 911 and then took her response one step further, going into the burning building and saving the building’s elderly occupants, who were still inside.

“When I heard their screams I didn’t think about it; these were my neighbors,” Parker said. “Me and God went straight in.”

Parker managed to avoid injury and get her neighbors out and away from the inferno unharmed.

An investigation of the fire indicated the cause was a faulty electric heater. Vicksburg Fire Chief Craig Danczyk said the occupants of the home said they heard a noise like a boom or pop, and the room was on fire. Damage from the fire was contained to the house and a car in the driveway.

Monday morning, the city of Vicksburg honored Parker with a commendation for her efforts presented by Mayor George Flaggs Jr.

“Ceola Parker did something courageous and heroic,” Flaggs said before presenting the certificate of recognition.

“She witnessed the fire; she knew there were some elderly people in there and before the first responders arrived, this young lady, not a first responder, not a city employee, but a dedicated person saw the fire called 911 and proceeded to get the elderly people out,” he said. “I don’t know if I could have done, it but you did.”