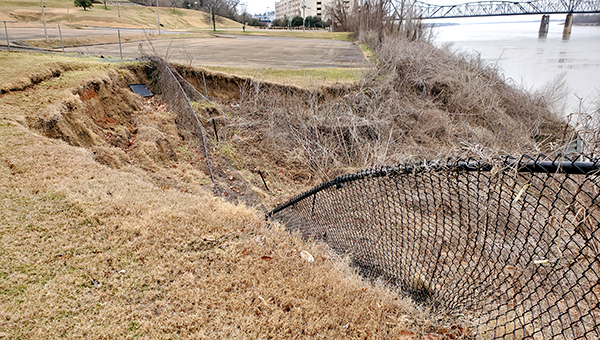 Depending on a decision by the Warren County Board of Supervisors, Riverfront Park could soon be closed.

The Vicksburg Board of Mayor and Aldermen on Monday approved a resolution to close the park and accept the donation of two lots by Golding Land Co. near Golding Barge Lines as the site of the new park. The board’s resolution will be presented to the supervisors at their next meeting on Feb. 21. If the supervisors approve the resolution, the park’s current location will be closed.

The city and county jointly operate and manage the park and share the costs of maintenance and repairs.

Mayor George Flaggs Jr. said engineers from Stantec, which the city hired to perform a study of the park and its problems, told a joint meeting of city and county officials “that it would be in our best interest to abandon that park and try to look for another site.”

The engineers, he said, could not guarantee or predict the city and county would not have to spend any more money on the park to mitigate problems caused by the Mississippi River because of the river’s current.

“At that point,” Flaggs said, “It’s cost-prohibitive. The other (problem) is because of the criminal activity and the vagrants living in there now. It’s not a safe place to go down to.”

Flaggs said at a September meeting of the Board of Mayor and Aldermen that since 2008, the city and county spent more than $1 million on slide problems.

He called the proposed plan to fix the park’s four erosion-damaged areas a “Band-Aid,” adding the engineers also pointed out there was a spring in the area that could also cause problems.

He recommended accepting the Golding property “to try and create a better location; a better place for a park.”

Flaggs believes the Golding property’s value exceeds that of the park, although City Attorney Kim Nailor said the city will have to have both sites appraised to determine their values. She said that is part of the city’s due diligence.

Since its opening, the park has been one of the most used recreation facilities in the city and has playground equipment, a walking trail and picnic pavilions. On most weekends and holidays the park would be full of families and groups using the facilities.

The park was closed briefly in 2018 to repair an erosion problem on the riverbank caused by a leaking water line that took down part of a fence and threatened playground equipment.

It was closed in February 2020 after heavy rains caused two landslides on the riverbank and on the hillside near the park road that covered the road in two spots.