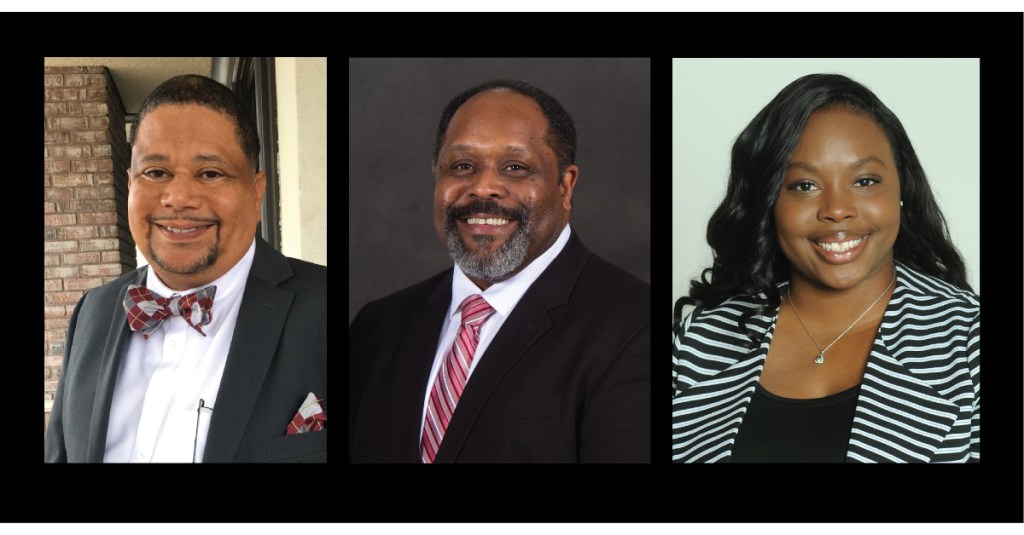 Three researchers from the U.S. Army Engineer Research and Development Center (ERDC) were chosen to receive the 2022 Black Engineer of the Year Awards (BEYA).

Christo (Chris) Lunderman, Herman Moore and Dr. Brianna Thompson have been awarded top honors with the BEYA, which recognizes African-American scientists and engineers around the country. The winners chosen are leaders shaping the future of science, technology, engineering, and mathematics (STEM), as well as promoting diversity and inclusion in the STEM pipeline.

Lunderman, a research physicist in the Information Technology Lab (ITL), received the Outstanding Achievement and Science Spectrum Trailblazer Award, which focuses on individuals who have created new paths for others in science, research, technology and development.

“I was surprised and honored to receive this award,” Lunderman said. “It felt good just to find out that I was nominated because it means that my peers and leadership feel that I have made a difference for others throughout my career here at ERDC.”

In his day-to-day role, Lunderman leads a diverse, multi-disciplinary team of engineers, scientists and technicians in the design and installation of sensor systems and communications to better quantify the condition of aging infrastructure.

“My favorite part about working at ERDC is working with and mentoring younger engineers and scientists,” Lunderman said. “I have a chance to share the experiences and insight that I have gained from more than 25 years at ERDC, but I also actively listen to their input and ideas. I find the most innovative solutions come from having a combination of fresh ideas and historical tacit knowledge.”

Lunderman also serves as a mentor to several ERDC employees, supports Diversity, Equity and Inclusion efforts and sits on an advisory board for employee morale efforts.

“As researchers, we are also in the relationship business,” Lunderman explained. “I tell our young engineers to treat everyone that they meet with the same level of respect, from the custodial crew to the senior leaders and to develop good working relationships with everyone, because we all have to work together to accomplish the mission.”

Moore, a computer scientist in ITL, said he feels honored and privileged to receive his BEYA recognition—the Professional Achievement Award. He is the leader and main technical developer of the Army Facilities Components System project. On that project, he plays an instrumental role by providing direction and input to teams, sponsors and customers to resolve technical solutions and enhanced application features.

Moore began his career at ERDC in 1996 and earned his master’s degree in computer science in 2004.

“Numbers have always fascinated me,” said Moore, whose love for mathematics and computer science began at a very young age. “The advancements and achievements within the computer science environment have allowed mathematics to be far more advanced, but simplified using software and programmatic language.”

With Moore’s technical capabilities and leadership experience at ERDC, he is always looking for opportunities to serve as a mentor to junior scientists and to develop himself to advance the mission.

His advice to engineers just beginning a career is to identify strengths and weaknesses.

“In areas where more strength is required, seek knowledge and wisdom from your peers as well as doctrine, where needed,” Moore said. “Working at ERDC has offered me various exciting challenges within my career; and collaborating with brilliant minds and solving various challenges has enlightened me as a person.”

Thompson began her career at ERDC in ITL three years ago as a mathematician and was chosen for the BEYA Modern-Day Technology Leader Award. Her research in hypersonic systems evaluation and design and the coupling of fluid, thermal and structure models for computational simulation of hypersonic systems is making a difference and advancing the capabilities of the Army and the DOD in developing state-of-the-art solutions to challenging problems.

Like Moore, Thompson says that her love for mathematics began as a child, and she credits her parents for encouraging her to never stop learning.

“I have always liked figuring things out and I’ve always loved numbers,” said Thompson, who earned her doctorate degree in computational science from the University of Southern Mississippi.

“I am always looking to improve,” Thompson said when she learned that she won the Modern-Day Technology Leader Award. “I was proud, but I know there is so much more to learn.”

Thompson’s advice to other African-Americans who may be interested in a career in STEM is simple—just go for it.

“You don’t usually see people that look like you doing things like this, but once you get there it just opens up a whole new world. So, just go for it,” Thompson said. “I was fortunate enough to have a love for learning at a young age. If that’s inside of you and you have an interest in STEM – go for it! The sky is the limit.”

“I am extremely proud of Christo, Herman and Brianna! Their work and dedication to their communities, ERDC and the nation speaks volumes to their caliber, work ethic, and character,” said Dr. David Pittman, director of ERDC.

They will be recognized at this year’s BEYA STEM Global Competitiveness Conference, which will be held in Washington, D.C. Feb. 17 through 19.