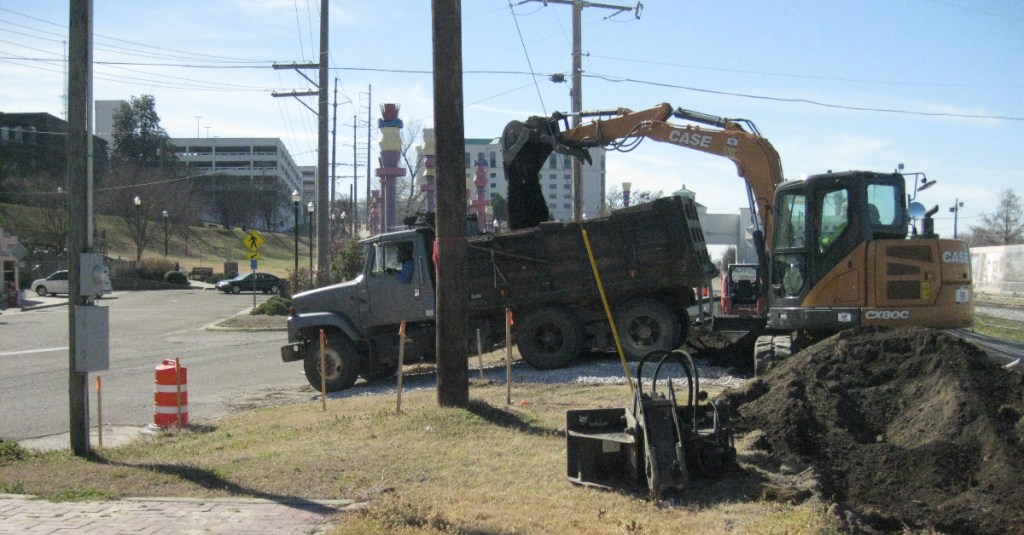 An employee for Construction Specialists of Jackson operates a track hoe to remove dirt from a section of ground near the Yazoo & Mississippi Valley Railroad Depot on Levee Street. The work is part of a project to improve Levee Street. (Photo by John Surratt | The Vicksburg Post)

Employees for Construction Specialists LLC of Jackson will have someone looking over their shoulders as they do the excavation for improvements to Levee Street.

The Board of Mayor and Aldermen on Thursday approved a $7,000 contract with Neel-Schaffer Engineers to provide an archaeologist to monitor the construction activity during work on the improvements along Levee Street from Washington Street north to First East Street.

The move comes as workers for Construction Specialists have begun using heavy equipment to prepare the area for improvements. The work is funded by $534,000 in Federal Transportation Alternative funds and a 20-percent match of $133,500 from the city.

“The Mississippi Department of Archives and History is requiring us to have an archaeologist present to monitor the work of the contractor in the northern portion of the Levee Street improvement project,” City Community Development Director Jeff Richardson said.

According to the contract with the city, the archaeologist would have to stop work on the site if human remains or evidence of burials or other items of possible historic importance are found. Richardson said state archives officials also expressed concern for the bricks that serve as the street’s surface.

The work is part of an overall plan for the area to make the city’s riverfront more attractive to tourists. That plan also includes improved docking sites along the riverfront, which will be built by the river cruise lines that visit the city.

Construction Specialists was the low bidder for the Levee Street project at $698,632. The company was one of three contractors submitting bids on the project. Fordice Construction of Vicksburg bid $1,039,943, while Central Asphalt, also from Vicksburg, bid $843,616.65. All the bids were more than the project’s $667,500 budget, but city officials were able to find additional funding to make up the difference.

The board is also considering a plan to extend Levee Street from its intersection with Dorsey Street in an industrial area in the southern part of the city to WaterView Casino.