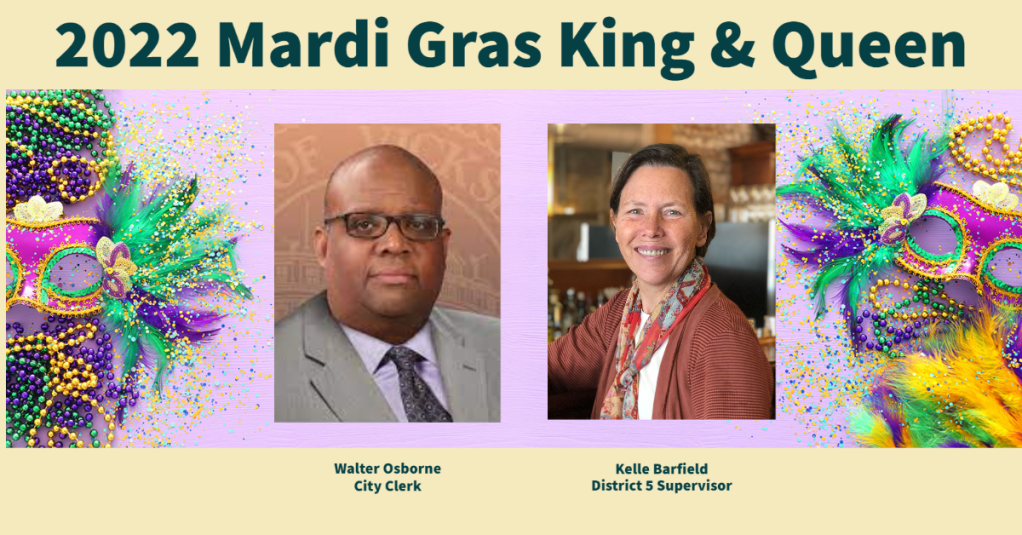 “We are honored to announce our Mardi Gras King this year to be Walter Osborne and Mardi Gras Queen is Kelle Barfield,” Hopkins said. “Walter Osborne, City Clerk for the City of Vicksburg, served for over 10 years as the ex-officio Board Member on the Main Street Board of Directors. He has been an instrumental advocate and volunteer for downtown Vicksburg. Walter has put his heart and soul in the success of the Vicksburg Main Street Program and the economic development of downtown Vicksburg. We can not thank Walter enough for all his hard work and hundreds of volunteer hours that he has put in Main Street.

“Our Queen, Kelle Barfield, Warren County Supervisor of District 5, is not only the owner of several buildings downtown but also another one of our advocates for the success of downtown Vicksburg,” Hopkins said. “Her distinguished leadership and drive for success has brought events such as Second Saturday to downtown. She continues to revitalize numerous buildings on Washington Street and advocates for small businesses.

The parade is scheduled for February 26 in downtown Vicksburg.

The Barkus Krewe, a free event open to all dogs in the Vicksburg and Warren County area will be held prior to the Mardi Gras parade. Registration for the pet parade will run from 2:30 until 3:15 p.m. the day of the event and begin at 3:30 p.m.  All dogs must be on a leash. A “pawty” at the Washington Street Park will be available following the parade