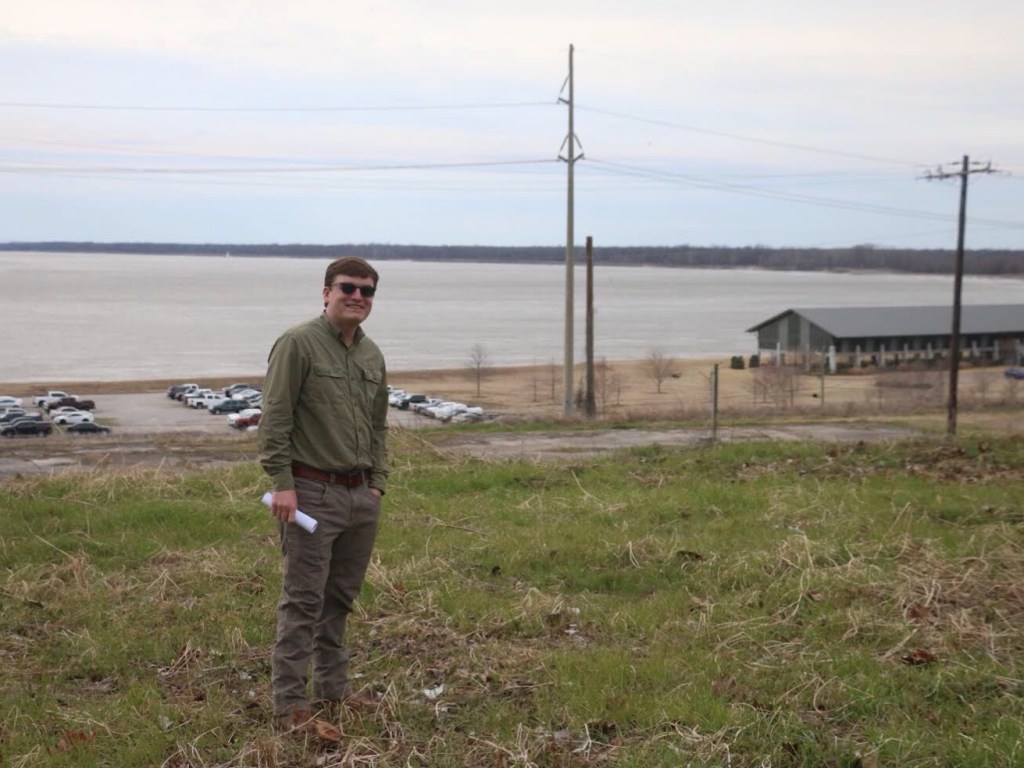 John Reid Golding stands on property his family has donated to the city of Vicksburg and Warren County. The property is being considered as a proposed site to replace Riverfront Park, which has become hazardous due to erosion. (Photo by Terri Cowart Frazier | The Vicksburg Post)

A tract of prime riverfront real estate is being offered to the city of Vicksburg and Warren County, as a proposed new home for Riverfront Park.

Located at the corner of Lee and Oak streets, Golding Land Company LLC has offered to donate 5.5 acres of land with the hope of it being developed into a park for both young and old to enjoy, company president John Reid Golding said.

Golding, who is half-owner of the company with his brother, Austin, said the property had been on the market for 15 years and the “right buyer just never came along.”

Knowing the property had been for sale, Golding said, Mayor George Flaggs Jr. reached out to the family about the potential of donating it for a park.

Through joint discussions and seeing the potential the property had of being developed into a park, Golding said donating the land was something they wanted to do.

“Vicksburg has given us and our business so much and such a tremendous workforce we wanted to give back, and this was a great opportunity to give back a piece of property that has so much potential to be a fantastic park,” he said.

Golding described the plans presented to him for the park by the city and county as exciting.

Golding said it had been part of the original parcel of land they purchased when acquiring the property where Golding Barge Line was built.

“We’ve always enjoyed going up there. You are just blown away by the view. There is really nothing else in Vicksburg like it. Downtown, you are looking at the canal. You can kind of see the river off at a distance, but when you get on Oak Street, that is probably the prettiest view in town,” he said.

In addition to serving the community as a park, Golding said he hopes the park would be a catalyst to reviving the Oak Street/Washington Street neighborhood.

“We think this will jump start that process,” he said.

While the property had never been sold, Golding said it had been used by Golding Barge Line.

“We did utilize the property once in the flood of 2011, with temporary offices on the site when our office flooded,” he said.

Also, Golding said they had considered building condominiums on the site many times, but never started the process.

Ironically, a buyer did approach Golding about purchasing the property after the decision was made to donate it to the city and county, He told them it was no longer for sale.

In an earlier story reported in The Vicksburg Post on Feb. 4, Flaggs mentioned the Golding property as a replacement for the Riverfront Park, which was closed due to hazards caused by landslides along the riverbank.

The city and county jointly operate and manage the current park and share the costs of maintenance and repairs. The Warren County Board of Supervisors will discuss formally accepting the Goldings’ land donation at its working session on Monday, Feb. 14.

The current park was developed with federal Land and Water Conservation funds, which means if the park is closed, the city and county will have to reimburse the money used for the project — unless a piece of property of equal or greater value than Riverfront Park is found.

Flaggs said he believed the Golding property’s value exceeds that of the current park, although City Attorney Kim Nailor said the city will have to have both sites appraised to determine their values as part of the city’s due diligence.