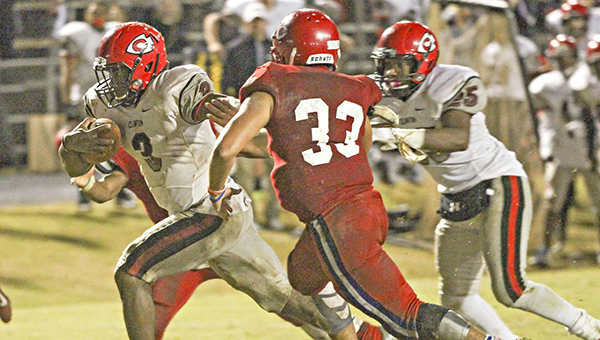 Cam Akers (3) carries the ball for Clinton High School during a 2016 playoff game against Warren Central. Akers will start for the Los Angeles Rams on Sunday in Super Bowl LVI against the Cincinnati Bengals. (File/The Vicksburg Post)

Super Bowl Sunday is upon us, and with it an unusual matchup of long-suffering franchises.

The Cincinnati Bengals, infamously, had not won a playoff game in 31 years until their magical run this year. Joe Montana and the San Francisco 49ers’ dynasty of the 1980s ripped their heart out in two previous Super Bowl appearances.

The Los Angeles Rams have a long reputation for being a bridesmaid but rarely the bride. They’ve been to 11 NFC championship games — the third-most of any team — and four other Super Bowls, but their only championship in the Super Bowl era came in 1999.

One of these two teams will end their championship drought and hoist the Lombardi Trophy, and whoever it is will have plenty of people rooting for them from this area.

The Bengals’ run from 2-14 in 2019 to AFC champion in 2021 has been sparked by former LSU stars Joe Burrow and Ja’Marr Chase. The quarterback-receiver combo has brought a swagger to a franchise that was long a punchline.

Burrow and Chase’s most impressive stats might not be their passing and receiving totals, though. That would be the 85 percent conversion rate they’ve enjoyed among Saints fans in Louisiana.

Burrow and Chase were two of the biggest stars of LSU’s record-breaking national championship team in 2019 and are beloved figures among its fans. Their immediate emergence as NFL superstars has coincided with a mediocre season for the New Orleans Saints.

Without their own team to root for in this year’s playoffs, LSU fans — most of whom are Saints fans by default — have traded in Tiger stripes for Bengal stripes and created a strangely rabid pocket of Cincinnati fans in Louisiana.

On the other side of the Mississippi River, and the field, plenty of people from Mississippi will be rooting for the Rams because of Cam Akers.

Akers is often considered one of the best players in Mississippi high school football history. He amassed more than 13,000 total yards and scored 149 touchdowns while leading Clinton High School to the MHSAA Class 6A title in 2016.

Plenty of Warren County fans got to see Akers’ high school battles with Warren Central. His Clinton team beat the Vikings in the 2016 Class 6A playoffs — after Warren Central trounced them in the regular season — and it seemed obvious even then that he was destined for big things.

Akers went on to play at Florida State and was picked by the Rams in the second round of the 2020 NFL draft. He was set to be their top running back this year, but tore his Achilles tendon in training camp. Amazingly, he rehabbed and returned in time for the playoffs.

Akers has plenty of family and friends in this area, but even without the local ties he’d be a player worth rooting for.
So who ya got? Burrow and Chase, on the case? Or are you aching for Akers?

Either way, it’s nice for fans in this area to have a rooting interest in two teams they normally wouldn’t care much about.