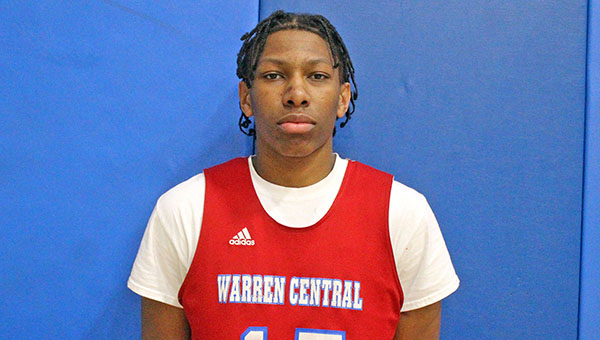 Warren Central basketball player Gaylon Turner scored a game-high 18 points in a 55-53 loss to Petal in the first round of the MHSAA Class 6A boys basketball tournament on Tuesday.

A day after Valentine’s Day, Warren Central flirted with an upset but wasn’t quite able to seal the deal.

Petal used an 11-0 run over the last four minutes of the third quarter to take the lead for good, and went on to beat Warren Central 55-53 in the first round of the MHSAA Class 6A boys basketball state tournament on Tuesday.

Cam Lewis had 15 points for Petal, including seven during the decisive third-quarter run. Jamar Jenkins scored nine of his 11 points in the second half, and Xavier Fortenberry also finished with 15 points.

Petal (21-5) advanced to face Pascagoula in the second round on Saturday.

Warren Central (8-16) had its season end despite giving Petal all it could handle. The Vikings led by as many as seven points in the second quarter and took a 32-27 lead into halftime.

After trading some baskets for the first three minutes of the third quarter, however, the Vikings went cold. They missed five consecutive shots and committed three turnovers in the last five minutes of the period. Lewis made two layups and a 3-pointer during the same timeframe to spark Petal to a 43-36 lead.

A steal and layup by Gaylon Turner as the quarter ended finally ended Warren Central’s drought and seemed to get things back on track. The Vikings cut it to 45-44 on a basket by Kevin Jackson with 5:10 left in the game.

Lewis answered with a rebound basket in the post seconds later, however, and Jenkins hit a 3-pointer with 3:55 remaining to put Petal ahead 50-44. A few free throws down the stretch closed it out. Warren Central’s final points came on a banked-in 3-pointer at the buzzer by DeCorey Knight.