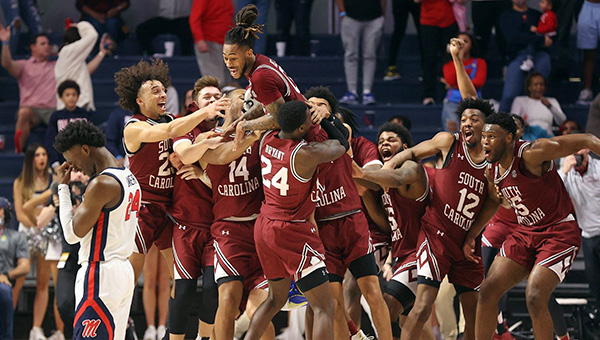 Unfortunately, South Carolina hit one of its own in overtime.

“I work on half-court shots every day. I just happened to be in that position and I just shot it like the way we shoot it every day,” said Reese, who finished with nine points. “The emotion that I felt was crazy, because I was thinking about it before it happened. Before we went into overtime the first time I was thinking somebody was going to have to make a big shot. First (Ole Miss) made it and then it came to me.”

Ole Miss lost its fourth game in a row.

“We had some breakdowns defensively, but still played well enough to win,” Ole Miss coach Kermit Davis said. “It’s a tough loss, but credit to South Carolina. (Erik) Stevenson made a big three down by one that was kind of contested, and teams just seem to make those plays against us.”

South Carolina trailed for most of the second half and by as many as eight, but then used an 11-3 run for a 68-66 lead with 25 seconds remaining in regulation. Bryant sparked the surge with a 3-pointer and Stevenson capped it with two from long range.

Joiner’s basket with 1.7 seconds left sent it to overtime tied at 68.

Carter’s layup gave South Carolina a 74-73 lead with 1:26 remaining in the extra period. Brooks made 1 of 2 free throws to tie it with 1:04 left, but the Rebels then missed two 3-point attempts.

Following a South Carolina timeout with two seconds to play, Jermaine Couisnard got the ball to Reese, who juked and split two defenders, then heaved it from the logo for the game-winner.

“The last play, all we were doing was putting a safety in the back. All we were trying to do was get him to catch it in front. (Murrell) went for a steal and the guy got behind him and still made a half-court shot,” Davis said.