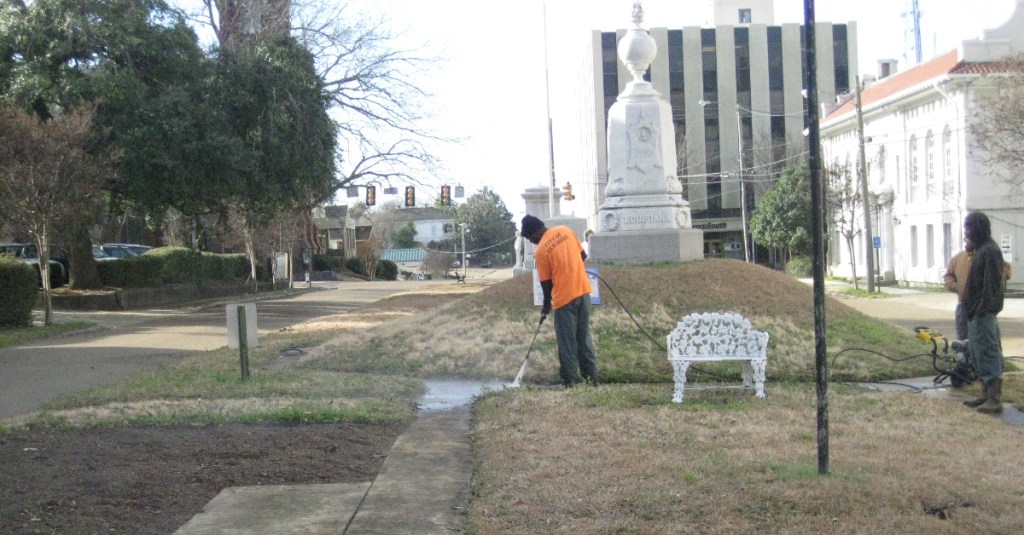 A city recreation department employee uses a pressure washer to clean off part of the sidewalk at the Memorial Rose Garden on Monroe Street. The city is in the process of restoring and replanting the garden. (Photo by John Surratt | The Vicksburg Post)

For years, Vicksburg’s Memorial Rose Garden, with its collection of roses and other flowering plants, has been a center of calm and beauty in the middle of the city.

The garden is home to monuments honoring the city’s dead from six wars and one honoring Confederate soldiers from Louisiana who died during the siege of Vicksburg in the Civil War. It has served as the site for Veterans Day and Memorial Day programs honoring those who died in combat.

But over the past few years, the garden has fallen into disrepair and is in need of attention. That attention came earlier this month when city parks and recreation employees began cleaning and removing the older plants for the garden’s reconditioning.

“We took everything out of the Rose Garden; all the roses, all the irises; redid the beds,” Parks, Recreation and Landscaping Director Rick Daughtry said, adding workers have been pressure-washing the park’s sidewalk.

The work, he said, “Needed to be done. It was 20-something years ago the last time (the garden was re-worked).”

The Rose Garden, Daughtry said, fell into disrepair because the roses were dying out.

“We really didn’t do a lot of pruning the last couple of years because you had 18 months of construction on the roadside (Monroe Street), and then we had an ice storm and when the ice storm was over, instead of pruning we left it free for six months,” he said. “A lot of those bushes were dead and a lot of those were hybrids. Those hybrids needed to be replaced; they only have a life expectancy of about 10 to 15 years.”

He said recreation officials have been working with Glen Beard, owner of the Flower Center Nursery on South Frontage Road, to develop a plan for replanting the garden. Once the plans are in, Daughtry said, crews will return to the garden and put the new plants in.

“We’ll re-mulch it, put the two, three birdhouses back up and then move on to our next project,” he said, adding he hopes the crews will be able to put the new plants in beginning Tuesday.

Libby Beard with the Flower Center said the flowers removed from the garden will be replaced by a selection of roses, azaleas and other flowers.

“We’re doing Encore azaleas,” she said. “They actually bloom three times a year in the spring, summer and fall into the winter and they keep their foliage all winter. There will be drift roses — those are a low-maintenance rose; they only get 2 feet tall. With fertilizer and a little pruning occasionally, they’ll stay pretty all the time except during the winter.”

Beard said the rose colors will be mixed in the beds where they’re planted in different areas of the garden. She said petite knockout roses that get about 18 inches tall will also be planted.

“They are a low-maintenance rose,” she said.

Lantana, a flowering plant that blooms in spring and summer, will replace the azaleas that were previously in the garden.

“The butterflies love that, and the hummingbirds,” she said.

“With the azaleas, there will be some foliage in the winter,” she said, adding that because the encore azaleas bloom three times a year “it will give the garden something (for people) to look at almost year-round. And most of it is all pretty much low-maintenance so hopefully, it will be a whole lot easier to keep it looking nice.”

The Vicksburg Memorial Rose Garden began as a small park to locate the Louisiana Memorial to honor Louisiana soldiers who died during the siege of Vicksburg.

A committee of local businessmen and architect William Stanton approached the mayor and aldermen about giving up a square of Monroe Street for the monument and other possible future monuments. The area was the old drill square for the Volunteer Southrons, a militia group, and the committee said no one had issues at that time with the closing off of this space. They also said that they had a dozen wealthy residents who were willing to finance planting trees and sod and purchase other things needed.

The monument was dedicated on June 11, 1887. In 1919, the United Daughters of the Confederacy promoted the addition of a memorial “to our brave soldiers and sailors who gave up their lives in the recent war (World War I).”

The memorial was then added to the square, followed in 1927 by the Bloom Fountain, and the War Memorial in 1986.