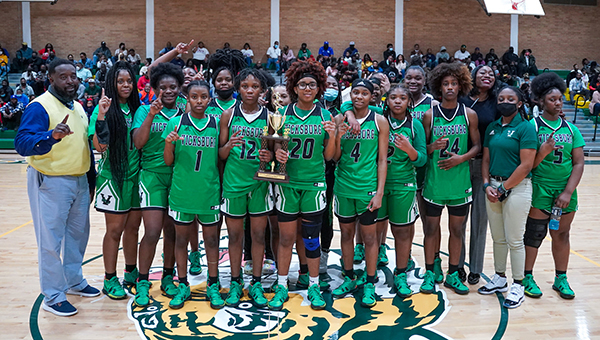 Earlier in his career, when he was an assistant coach for Vicksburg High’s boys’ basketball team, Troy Stewart said there was one lesson he never forgot.

“Working with the guys, we went to the Coliseum three or four times. But Coach (Dellie C.) Robinson always used to let us know that there are coaches who spend their entire careers that never walked in those doors. So I never take it for granted,” Stewart said.

Years later, with a string of successful seasons under his belt as the coach of Vicksburg’s girls’ team, the words of his mentor echo even louder in Stewart’s ears.

His Missy Gators reached the MHSAA Class 5A semifinals two years ago with a young roster. They lost in the second round last year. Now, as they prepare for another playoff run with only one senior on the roster, it’s time to cash in on a rare opportunity to win a state championship.

They’ll host Cleveland Central in the second round of the Class 5A playoffs on Friday at 7 p.m. Tickets can be purchased through gofan.co and the game will be streamed on the NFHS Network.

“I just know that when you get a group like we have now, with the chemical makeup we have now, that have been playing and know each other real well, you have to take advantage of it,” Stewart said. “We know we’ve got something special so we’re trying to make it work — now.”

Vicksburg (19-7) beat Forest Hill 66-43 in the Region 4-5A tournament championship game on Feb. 11, for its 20th win of the season and third consecutive region title.

The team that went nearly 20 years without winning a trophy has become a dynasty in its league. This was its fifth straight trip to the championship game of the region tournament, and seventh in nine years.

The Missy Gators have had a winning record and won at least 15 games in each of Stewart’s five seasons as coach. The most recent run of success, he said, was rooted in the chemistry of a core group that is in its sixth season together.

The only senior on the roster is guard Destini Sims. There are nine juniors, including starters Ja’Na Colenburg, Janiah Caples and Layla Carter, who all average at least nine points per game. Sims is averaging 11.2. Other juniors like Jelisa Tyler and Kalia Bland have provided valuable minutes as well.

“The juniors that I have now have been playing together since they were in sixth grade. Destini, who is the only senior we have, was playing with them when she was in seventh and eighth grade,” Stewart said. “They’ve literally had a college career in high school. They’re a unit. They know each other, they know each other’s behaviors.”

Best of all, they’ll have another season together in which to win a championship. Stewart, though, would certainly like to be going for a repeat instead of a last dance situation in 2022-23.

The lesson of how difficult it can be to turn dreams into reality has been hammered home the past two seasons. The trip to the 2020 semifinals was followed by a home playoff loss to a tough Neshoba Central team in 2021. A potential rematch with Neshoba awaits this year. If both region champions win Friday, they’ll play next week for a trip to the Class 5A semifinals in the Mississippi Coliseum.

This season, the Missy Gators forfeited several region games in January because of COVID-19 protocols. It ultimately didn’t affect them too badly — they won their two region tournament games by 35 and 23 points — but was a reminder that the end of the season might only be one positive COVID test away.

Worse, it interrupted the flow of the season by canceling practices as well as games. Stewart said he’s had to strike a delicate balance down the stretch of keeping his team ready to play without running them into the ground.

“At this point in the season, in any other season without a COVID issue, we’d be as efficient as we could possibly be right now. This would be the time we were firing on all cylinders. I still see a couple of cylinders not firing,” Stewart said. “I’m trying not to be overbearing in the gym when we practice, but I want to make sure we’re clicking when it’s time to click.”

CLEVELAND CENTRAL AT VICKSBURG
• Friday, 7 p.m.
• MHSAA Class 5A girls basketball state tournament, second round
• Tickets are available through gofan.co
• The game will be streamed on the NFHS Network