AWAY FROM THE STORM: Warren County, Vicksburg officials reflect on 2021 Ice Storm 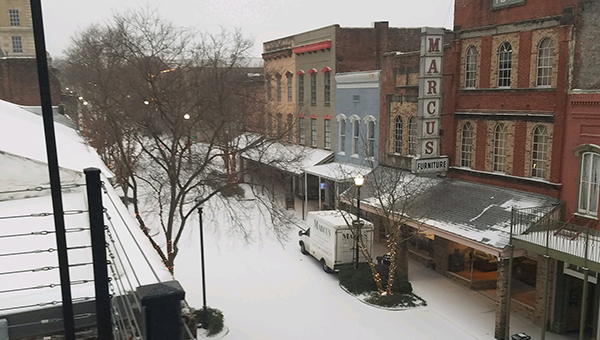 One year ago this week, Vicksburg and Warren County were in the grips of one of the worst winter storms of the decade.

The February 2021 ice storm left almost 6,000 Entergy customers without electricity and dumped inches of ice, sleet and freezing rain, combined with a dusting of snow. Warren County was, for all intents and purposes, shut down for a week. More than 2,000 911 calls were made.

Water leaks were widespread in Vicksburg due to burst pipes, causing Mayor George Flaggs Jr. to request that residents limit their use of running water for 48 hours as a form of “emergency water recovery.”

It was a long week — one that local officials say they hope to never repeat.

“To God be the glory that we didn’t have a repeat this year,” Flaggs said. “That was one of the most devastating times in the city of Vicksburg, to impact so many in such a short period of time. As I look back, I reflect on the resilience of our people.”

It was a time of teamwork amid the chilling temperatures, as first responders worked together to transport essential workers to and from hospitals and the Port of Vicksburg. Firefighters, police officers and even local politicians and officials helped transport others around town.

Warren County Emergency Management Coordinator John Elfer said the road conditions were the worst he’d ever seen, but the positive side of the situation was the community response.

“The positive thing was we were all able together as first responders to get our essential workers to and from work. We helped doctors and nurses, and even employees at the Port who were essential. It was a long week,” Elfer said. “The public pretty much listened to us and stayed home, and we closed a lot of stuff and worked together. It demonstrated that we can survive anything in Vicksburg.”

As a way to thank first responders and linemen during the ice storm, Southern Sisters’ Café and Catering, Fit Chef, Goldies Express BBQ and Catering and the Gumbo Pot donated hot meals to those out in the elements.

Warren County Sheriff Martin Pace said that, although the situation was one of the most trying times of his career, he was impressed with the cooperation between local and state agencies in response to the disaster, as well as the public’s willingness to work with law enforcement and heed the instructions to stay home.

“The Winter storm of 2021 was challenging for everyone, but the citizens of Vicksburg and Warren County once again rose to the challenge,” Pace said. “As beautiful as it was to look at, it stretched resources to the limit and I do not look forward to another storm of that magnitude.”