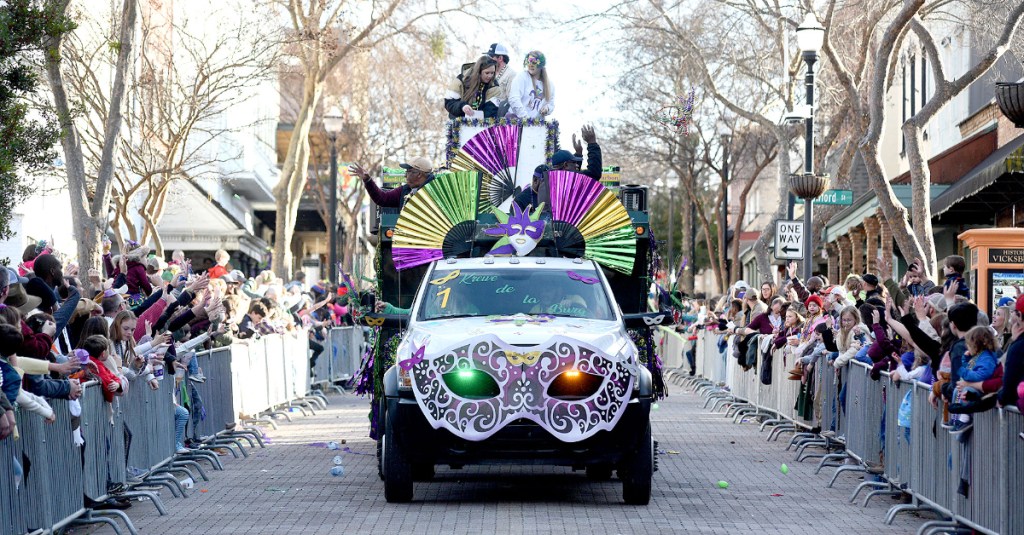 The float for the Mississippi Center for Innovation & Technology Dedication moves down Washington Street during the Downtown Vicksburg Mardi Gras parade in 2020. The 20th edition of the parade rolls Saturday. File-Courtland Wells

After a year off, the Mardi Gras season returns to Vicksburg next Saturday with the Downtown Vicksburg Mardi Gras Parade and the Southern Cultural Heritage Foundation’s Carnaval de Mardi Gras & Gumbo Cook-off.

This year’s parade marks the 20th year floats have rolled along Washington Street.

The parade route runs from Belmont Street down Washington Street to Jackson Street, where it will disband.

Two events will proceed the Mardi Gras Parade. First, the “Food for Thought: Food history of the Mississippi Delta” program will be hosted at the Catfish Row Museum, 913 Washington St.,  at 2 p.m. The free program will focus on “Margaret Walker: Food, Fellowship, and Forms of Activism”  featuring Robert Luckett, civil rights historian and director of a special collections archive with the Margaret Walker Center at Jackson State University, as its speaker.

The Krewe of Barkus pet parade will also precede the Mardi Gras parade at 3:30 p.m. Barkus will form on Veto Street and go north to Washington Street Park.

“Anybody who would like to have their pet in the parade can sign up the day of the parade,” Hopkins said.

The Carnaval de Mardi Gras gumbo cook-off is from 5 to 8 p.m. on Crawford Street between Cherry and Adams streets.

“We’ll think we’ll have 10 teams, which is great,” said Nancy Bell, executive director of the Vicksburg Foundation for Historic Preservation.

She said eight teams participated in the 2020 cook-off. The 2021 gumbo cook-off was canceled because of COVID-19.

Admission to the gumbo cook-off is $10 and $5 for children. Admission allows people to sample the gumbo prepared by the cooks and gives the children access to the games and activities. Music will be provided by Legal Tender.

There are two categories for gumbo, seafood and non-seafood. Trophies will be awarded for the first-, second- and third-place winners in each division and there is also a people’s choice award.

“It will be a lot of fun,” Bell said. “We are so excited to have this great festival back again. I think people are ready to get out and about; they can go to the parade and they can come to see us.”