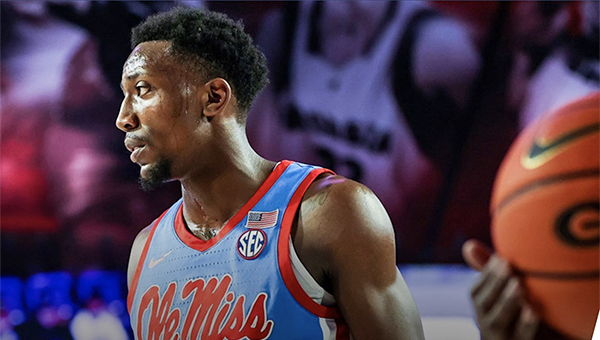 Ole Miss' Tye Fagan scored 20 points to lead the Rebels to an 85-68 win over Georgia on Saturday. (Ole Miss Athletics)

That trio came through in the absence of the Rebels’ top three scorers, Jarkel Joiner, Daeshun Ruffin and Matthew Murrell. Joiner and Murrell were sidelined with flu-like symptoms. Ruffin is out for the season after a knee injury suffered against LSU on Feb. 1.

“Austin Crowley really ran our team and was great from the point guard spot. That was the best Jaemyn Brakefield has played this year because he confidently made shots, and it was just great for Tye Fagan to come home and have 20 and five tonight,” said Ole Miss head coach Kermit Davis. “I’m really proud of our team. It’s a much-needed road win for us. Hopefully we can get back and get the troops rallied up so everybody’s ready for Auburn.”

Fagan, who played three seasons at Georgia, had five assists as did Crowley and Luis Rodriguez. Nysier Brooks added 10 points and six rebounds. The Rebels committed only seven turnovers.

After scoring the final seven points of the first half to take a 42-38 lead, the Rebels got the first four points of the second half and kept the lead, going up by as many as 20 late. Ole Miss shot 56 percent, made 9 of 21 from 3-point range, and outscored Georgia 20-7 off turnovers.

DeAndre Pinckney cut the UTEP lead to five with 12:03 left in the game on his second 3-pointer of the half, but Souley Boum knocked down a pair of jumpers to push the lead back to 10. The Golden Eagles were able to cut the deficit to five again, this time on a fastbreak basket from Isaih Moore, but the Miners answered with a 10-0 run to pull ahead by 16.
UTEP’s lead got as big as 19 before the final buzzer sounded.

Jackson State took a 60-57 lead on a jumper by Ken Evans with 33 seconds remaining. Alcorn’s Dominic Brewton made a jumper of his own to cut it to one, and JSU’s Darrian Wilson missed two free throws with 13 seconds left.

Brewton missed a shot with the clock winding down, but Agnew grabbed the offensive rebound and was fouled. He made both free throws to put the Braves ahead 61-60, and Dekedran Thorn stole the ball as time expired to preserve the victory.
It was Alcorn’s 10th game this season that has been decided by four points or less.