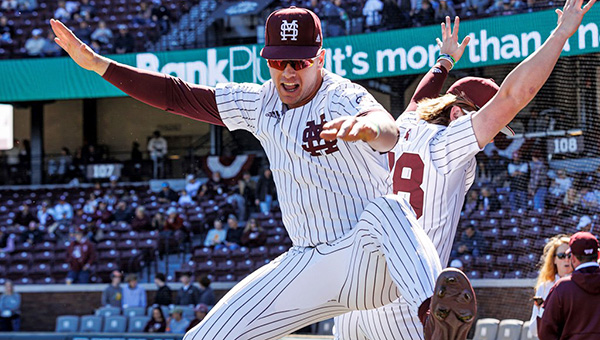 STARKVILLE — Mississippi State finally cleaned things up after two days of dealing with the Dirtbags.

Mississippi State was outscored 16-3 and totaled 10 hits while losing the first two games of the three-game, season-opening series at Dudy Noble Field.

Corder’s two-run home run in the second inning helped the Bulldogs to an early 3-0 lead, and then they blew it open with seven runs in the fifth inning. Hunter Hines and McGowan each hit a two-run single during the big rally.

Cade Smith allowed one hit and one run in 5 2/3 innings pitched to get the win. He finished with six strikeouts.

Graham finished 2-for-3 with four RBIs, and Alderman was 2-for-3 with three RBIs and three runs scored for the Rebels. Graham’s single drove in the first two runs in the big fifth inning and made it 5-1. Alderman’s homer capped it off and put them ahead 11-1.

The Golden Eagles (3-0) scored three runs in four separate innings on Sunday, and two more in one more frame, as they outscored the Lions 29-5 in the series.

Danny Lynch added two hits to extend his hitting streak to 14 games dating back to last season. Reece Ewing also had a pair of hits and an RBI.

Waldrep limited the Lions to three hits and fanned seven batters at one point, and the first nine outs were recorded via a strikeout. He walked one and gave up his only run on an RBI single to Drew Hudson in the fifth. Five relievers followed him to split up the last 3 2/3 innings.

After drawing 4,860 fans for the Sunday contest, the Golden Eagles drew 14,006 for the three-game series, marking the second-highest opening weekend attendance in the school’s history.