‘We’re back, baby!’: Run Thru History returning to VNMP for 2022 edition 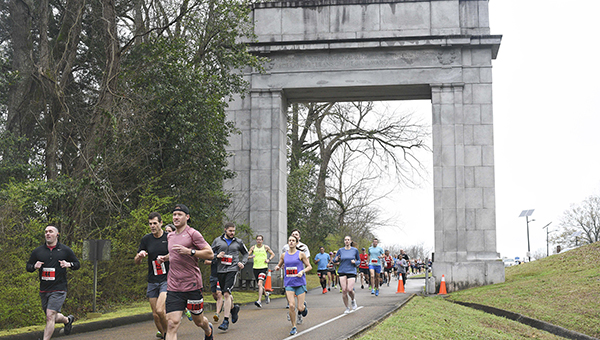 Runners pass through the Memorial Arch during the 2019 Run Thru History 10K in the Vicksburg National Military Park. After leaving the park in 2021 because of COVID-19 restrictions, the Run Thru History will return to the VNMP for this year's edition, set for Saturday, March 5 at 8 a.m. (File/The Vicksburg Post)

The Run Thru History is coming back home.

After relocating across town because of COVID-19 restrictions in 2021, Vicksburg’s oldest and largest running event will return to its traditional route in the Vicksburg National Military Park for its 43rd edition on March 5.

“We’re back, baby!” race director Phillip Doiron said with a laugh. “The park is the reason for the Run Thru History. One goes with the other, and we could not be happier to be there.”

Although it is back in the VNMP, Doiron said the atmosphere will be toned down a bit. Continuing restrictions on VNMP employees mean that historical exhibits and interpretive activities that normally accompany the Run Thru History will not be held.

Runners and walkers will not be required to wear masks, however, and other associated events like the after-party and awards ceremony will go on like normal.

“The Military Park is welcoming us back in, but their staff still has some restrictions due to the pandemic and will have a limited role in the event,” Doiron said. “But the race will be in the park, there will be no restrictions (on runners), and we want to welcome everybody back.”

The race will begin at 8 a.m. on Saturday, March 5. Online registration is now open at runthruhistory.org, or in person at the Purks YMCA. The entry fee is $30 until Feb. 28, and $35 after that date, for the 10-kilometer run and 5K race walk. The children’s 1-mile fun run is free.

Late registration and packet pick-up will be held from 4 to 8 p.m. on March 4 at race headquarters — Hampton Inn, 3330 Clay St., located across from the VNMP entrance — and again from 7 to 8 a.m. on March 5.

The Friday registration session will include a spaghetti dinner and social.

“They (Toney’s) are the official postrace site for any runners who want to keep having a good time. They’re going to have crawfish and music,” Doiron said.

The 2020 Run Thru History was one of the last major events in Vicksburg before the onset of the COVID-19 pandemic less than a week later. With the VNMP closed for official events, the 2021 edition was based at WaterView Casino across town and followed a unique course through the city.

“I would love to think we’re bookending this thing,” Doiron said.

Doiron was thankful to WaterView for hosting last year’s race, but was also happy to bring the Run Thru History back to its natural home in the Military Park.

“It’s fun. You get to focus on what this race is there for, and that’s the people in town and out of town. It’s a local tradition. It’s a tradition for people to come from many states over because the park is such a destination,” Doiron said. “To have an event in there that can both feature the natural beauty of it and the significance of what happened there is a neat reason to have the race.”