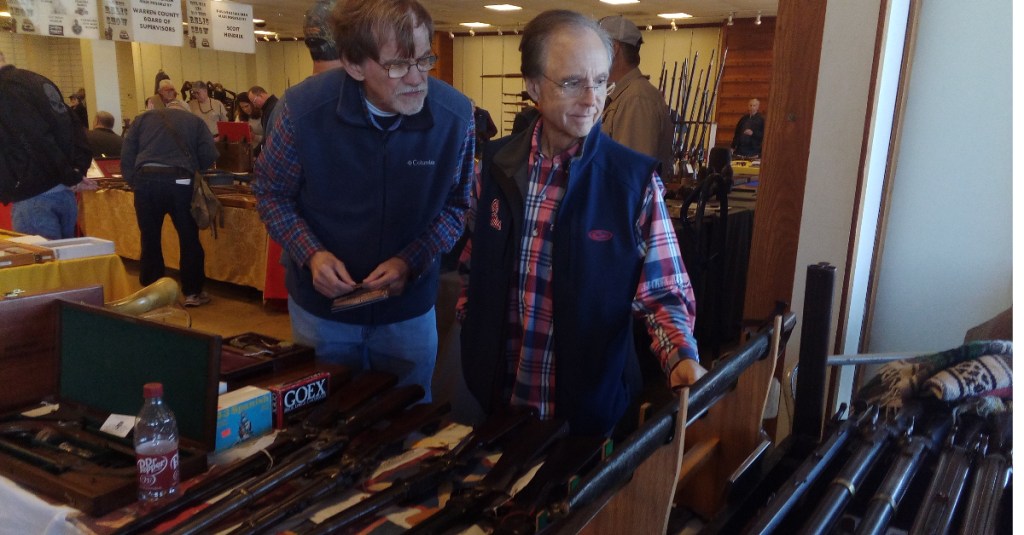 By Jeff Byrd
Vicksburg had a central role in the American Civil War, being the last major Confederate stronghold on the Mississippi River.
The 1863 Siege of Vicksburg is regarded as one of the greatest campaigns in military history.
Saturday and Sunday at Vicksburg Commons, formerly known as the Outlets at Vicksburg, fans of history, collectors, sellers and buyers traveled from across the country to get a firsthand glimpse of relics from that time period.
Jimmy Moore of Longview, Texas drove more than four hours to look at the wares from the annual Vicksburg Guns & Relics Show. He was impressed.
“I’ve been coming to Vicksburg for more than 60 years,” Moore, 73, said while holding a Remington rifle, circa 1858, he had bought. “Vicksburg is like the center of the Civil War.
“A few years ago, I came through. I found a photo from 1956 of a ceremony at the Illinois monument,” Moore said of the historic mausoleum monument that is a highlight of the Vicksburg National Military Park.
“I was in that photo,” he added. “I was seven years old.”
Moore said he has bought almost 800 relics from several military conflicts in the 1800s. His best find was a British cavalry saber from 1852.
Carol Carson of Ruston, La., was hoping her husband, Francis, could sell some of his Civil War gun collection.
“I began collecting in 1995,” Francis Carson said. “I got up to 98 guns. Most are from the Civil War, but I do have one that goes back to 1725. That’s why we go to gun shows.”
“I told him he can keep 15 of the best guns, but the rest need to be sold,” Carol said.
David LaSlavic, who owns Arizona Swords in Phoenix, had one of the best collections from a single Civil War soldier. Union Private Steven Ward belonged to the 55th Massachusetts. Many Americans are familiar with the 54th Massachusetts. This was the unit whose story was captured in the movie “Glory,” starring Denzel Washington, Morgan Freeman and Matthew Broderick.
“The 55th was a companion regiment to the 54th,” LaSlavic said. “As Glory depicted the final battle at Fort Fisher, the 55th did not participate. They were in the longer campaign and a few days later fought at the Battle of Mary Hill. Steven Ward was killed in the battle. What I have here is an Enfield Rifle he used. The Enfield Rifles were actually made by the Confederacy and outfitted for their army. These rifles were captured by the Union forces and then when the African American units were formed like the 54th and 55th, they were given to those troops like in ‘Glory’ and to Steven Ward.”
LaSlavic said Vicksburg has been one of his favorite stops.
“This is my fourth trip here,” he said. “I drive in, do the show, and then move on. I’ll be in Louisville next week.”
As for the Vicksburg campaign, LaSlavic said historians are enthralled because of Ulysses S. Grant’s military masterpiece.
“Well, this campaign showed Grant’s ability as a commander. It was perhaps the greatest campaign of the Civil War and of the greatest of all time,” LaSlavic said.
Putting on a two-day show like the Vicksburg Guns & Relics Show is an undertaking. For Vicksburg Civil War Museum owner and collector Charles Pendleton, it’s worth it.
“This is my third year and each year it has doubled in size,” Pendleton said. “We’re actually looking for a bigger place because more people want to come.”
Pendleton said Vicksburg’s central role in the War and being centrally located on I-20 between Atlanta and Dallas is the reason the event keeps growing.
“This is also a family-oriented show,” Pendleton said. “Most of the people here are just four hours away.”
Pendleton said his love for relics from the Civil War came from a desire to research the role African American soldiers played in combat.
“I hadn’t seen a lot of it at the shows or in museums,” he said. “Sometimes, I was the only Black man there, but people treated me friendly. People see that Confederate flag, but it is a part of it. I started going to shows and now I can’t stop.”
Pendleton said he was happy to see LaSlavic’s display of Steven Ward’s equipment.
“That’s what I look for,” he said. “When I can afford it, I buy something like that. If I can’t, I keep going.”
As for his collection, which can be seen daily in downtown Vicksburg at his museum on Washington Street, Pendleton said, “It’s pretty big.”