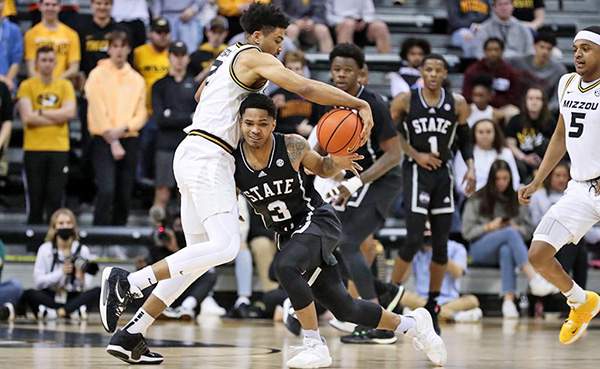 COLUMBIA, Mo. (AP) — With one good weekend, Mississippi State climbed back in the hunt for a first-round bye in the Southeastern Conference men’s basketball tournament.

Shakeel Moore made a layup with 10.5 seconds left Sunday night to give Mississippi State a 58-56 win over Missouri.
Moore finished with nine points, which was the most he’s scored since also having nine against Kentucky on Jan. 25. He also had seven rebounds and two steals.

“It’s been up-and-down for me,” Moore said. “At the end of the day, it’s just basketball. I’ve had to tell myself that every day leading up to the last two games, I could have the confidence to go out and play hard. That’s what I did. When you play hard, everything falls in place.”

With four games left in the regular season, the Bulldogs are among five teams tied for fifth place in the SEC with 7-7 league records.

The fifth- through 10th-place teams in the regular season earn a first-round bye in the conference tournament. Mississippi State plays two of the teams it is in contention with, South Carolina (16-10, 7-7) and Vanderbilt (14-12, 6-8), this week, and only needs one more win to secure a bye.

Missouri is two games back of 10th-place Vanderbilt.

“We still have belief and hope in each other,” Moore said. “We’re going to continue to fight and try to end this season with a bang. That’s what we plan on doing. It’s just trust, being able to be there for one another and to fight for one another.”

“I was just short on time. With the game tied up, we needed a basket. I saw an opportunity to get the rebound and a break, and I chose to be aggressive. I wanted to take it at them,” Moore said.

Brown hit a 3-pointer, Davis followed with a jumper and Brown made a layup to give Missouri the lead at 40-39 about 5 minutes into the second half. Those baskets were part of a 10-0 spurt that made it 44-39 when Javon Pickett made a layup with 12:28 to play.

Six different Bulldogs players scored in a 12-4 run over the next 6 minutes to give them a two-point lead. Jarron Coleman answered with a layup and then hit a 3-pointer to give the Tigers a 54-51 advantage with 3:41 remaining but they went 0-for-5 from the field the rest of the way.

“We talked about not starting out the second half the way we did the first, but sure enough they came out on fire and we struggled,” Mississippi State coach Ben Howland said. “They ended up having the lead late in the game, but I’m very proud because our guys stayed mentally tough and found a way to get the win in a very important road game for us.”