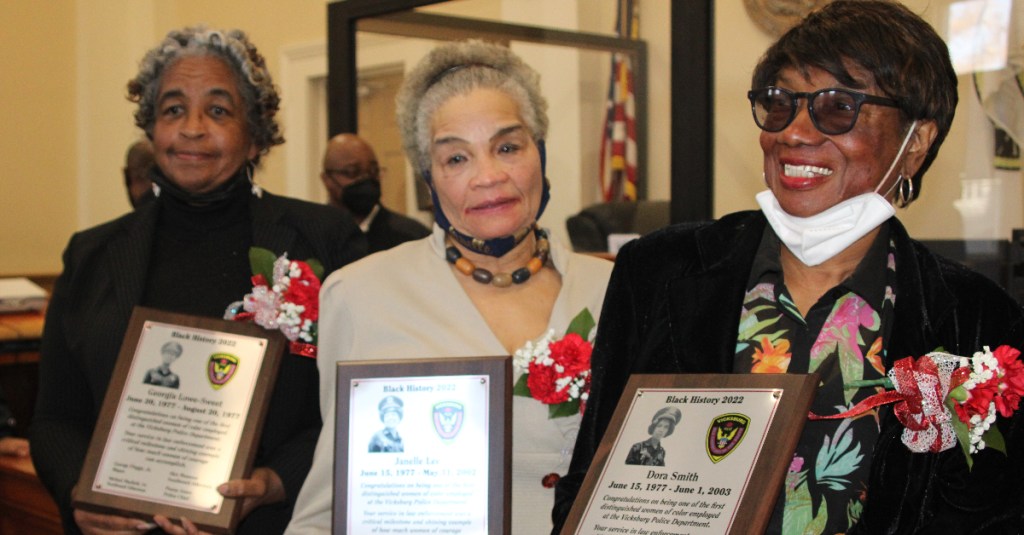 To many people outside the Vicksburg Police Department, those names may not seem significant, but they hold a place in the department’s and the city’s history as Vicksburg’s first three Black female police officers.

“They led the way for me,” Police Chief Penny Jones said.

“These young ladies that we recognize today I consider pioneers and trailblazers,” Mayor George Flaggs Jr. said. “I think it’s fitting for them to come to tell their story. We are makers of history and as we make history we need to mark it so that our children and our children’s children will understand the trails that we walked.”

He called the three women phenomenal, gracious ladies who have earned the community’s respect because “they were able to protect and serve with honor, with dignity and pride.

“I’m honored on behalf of the Board of Mayor and Aldermen of the city of Vicksburg to recognize these ladies. It’s a day that’s long in coming,” he added. “History has been made and will be made again and again and again.

“We honor those who serve, we honor those that defended us, we honor some of the best police officers that ever served who just happened to be Black women.”

North Ward Alderman Michael Mayfield said the three women “came on at a time when there were none (female officers) and to endure what they had to endure in that day, I promise you it wasn’t easy.

Mayfield also commended the officers in the department, telling them, “You are needed and you are wanted by the majority. Thank you for the job that you do.”

Lee started her career in law enforcement as a crossing guard and worked her way up the ranks, becoming the department’s first female deputy chief. She retired in 2002 as a lieutenant.

“I joined the department on June 15, 1977,” Lee told the people gathered for the program honoring former officers. She said when they started, the ladies didn’t have the equipment officers have today, pointing out they had a Citizens Band radio and drove a Plymouth car.

She also worked in community service and worked undercover for the Bureau of Alcohol, Tobacco and Firearms “until they started showing me on TV.”

Smith recalled one of her first calls.

The call, she said, was known as an inquest call to check on the condition of a person at the request of friends and family and involved a man who lived on the corner of Walnut Street and First East Street.

When she arrived, she discovered the man died sitting in his rocking chair. Smith said the supervisor kept asking about the man’s condition, “And I was afraid to touch him; I could not put my hand on that man. I was afraid of dead people.”

A 1974 graduate of Jackson State, Lowe-Sweet left the police department early to pursue a career in education.

She recalled a burglary call on Washington Street where her partner told her to pull her gun.

“My hands started shaking,” she said as she demonstrated her actions. “I knew that was not for me.”

Jones said after the program the women helped her when she joined the department, adding Smith wanted her to work in the juvenile division.

And it wasn’t just Lee and Smith, she said, “You had several others — Jamie Carter, Sandra Williams, Tabitha Crawford; we all became sisters. They made sure I had the right equipment; they looked over my reports. If anything was going on, anything new, they always came to me, talked with me, mentored me. It was a sisterhood.”