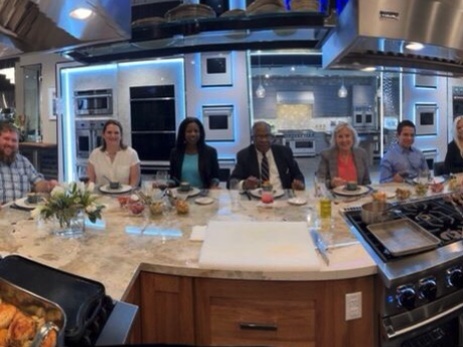 The Catfish Row Museum could soon feature a kitchen.

The visit included a tour of the company’s 40,000-square-foot showroom. Flaggs said City of Vicksburg travel expenses for the trip are reimbursed by Middleby Corp.

A demonstration kitchen was included in the plans for the museum and Fondren said work is underway in a part of the Monte Carlo Building that houses the museum to prepare a space for the kitchen. Once that work is done, she said, officials will meet with a kitchen designer and Middleby representatives will help with the kitchen’s layout.

“Middleby has a rich history and is known in Mississippi for their purchase of Viking,” Fondren said. “We asked for their expertise to help us design an innovation demonstration/teaching kitchen using their Ventless Kitchen Solution.”

She said the group shared the goals of Catfish Row Museum and Vicksburg’s story of its culture and the foodways with a friend of hers and the executive vice president of sales for Middleby.

“Because the Museum is in a historic building and has impossible ventilation and space issues limiting what we could do, we asked for their expertise to help us design an innovation demonstration/teaching kitchen using their suggestion for a Ventless Kitchen solution,” Fondren said.

Fondren said the plan for the kitchen is to have cooking demonstrations by food authors and chefs and to provide the opportunity for culinary tourism by giving visitors a taste of dishes from the region.

“The demonstration kitchen space will also be available for rentals, kids cooking classes, private cooking classes, nutrition counseling and more,” Fondren said. “The Catfish Row Museum is looking forward to sharing our discoveries about food history with the community and tourists.”

“I learned so much about commercial and residential appliances and I think if we were to continue to pursue that (demonstration kitchen) we could end up with her not only utilizing some of the equipment but at the same hopefully look at how we can get a demonstration kitchen right here in Vicksburg,” he said.