LOOKING BACK: The fate of the outbuildings at Planters Hall 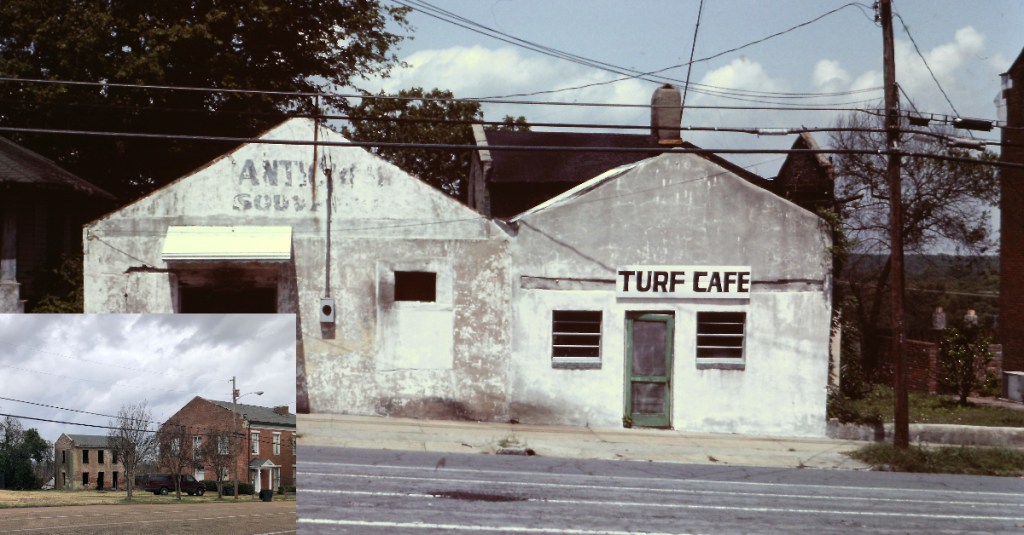 In 1834, the building that we know as Planters Hall, on the southwest corner of Main and Monroe streets, was erected to house the Vicksburg branch of the Planters Bank of Natchez.

The bank also built other branches in Port Gibson, Woodville, Monticello, Rodney, Columbus and Liberty, but only the Vicksburg branch of the Planters Bank stands today. The first floor of the Greek Revival building was used for banking business and the second floor was reserved for living quarters for the bank president and his family. A building behind the bank housed the kitchen and servant’s quarters. In front of the servant’s quarters were two small buildings built adjacent, used to house the bank’s carriage and horses.

A state-owned bank, the Planters Bank system had two-thirds, or $2 million, of its principal contributed by the Mississippi Legislature. An additional $1.5 million was generated by issuing bonds that were sold on the New York Stock Exchange, primarily to British investors. One of these investors was British Poet Laureate William Wordsworth. The bonds were backed by the full faith and credit of the State of Mississippi.

Two years later, President Andrew Jackson issued the Species Circular requiring “cash on the barrelhead” for all land purchased from the government.

The demand for gold rather than paper currency at a time when the country was rapidly opening its new frontiers, pressed banks to come up with the bullion necessary to make those transactions. This led to the Panic of 1837 and a national depression followed. Planters had their lands, along with the tools of their trade, confiscated when banks were forced to foreclose on outstanding loans.

Planters Bank raced to the brink of insolvency with the rest of the banking community and the Planters Bank system was forced to close its doors in 1842.

But the bonds used to initiate the bank system were backed by the State of Mississippi and the investors who held them looked to the state to honor them. However, because of the financial crisis of the 1830s and 1840s, many people in Mississippi had been forced into debt and they were not interested in having the state repay the bonds. In fact, the gubernatorial races of the 1840s and 1850s were not determined by the experience of the candidate or his political wits, but by his stand on repayment of the Planters Bank bonds.

Among those who lost a bid for the governor’s seat was Jefferson Davis. In 1854, the voters of Mississippi registered their voices again at the ballot box by passing a constitutional amendment that repudiated the debt forever.

This decision fell on deaf ears abroad. English investors created the Council of Foreign Bondholders in 1868 to try and force the recovery of the investments that they had made in American states and other countries. The Council folded in 1990 with Mississippi being its only unsettled account. The Planters bonds were sold at auction for about $100,000, less than ten percent of their face value, to British citizen David Barry. Barry stated that it bothered him a great deal that Mississippi, a still-solvent institution, was getting away with reneging on a legitimate debt.

This was further exacerbated when his letters to Governor Kirk Fordice and State Treasurer Marshall Bennett about a negotiated settlement went unanswered. In September 1992, he and other Britons filed suit in the U.S. District Court in Jackson seeking to make the state redeem at face value $1.475 million of the bonds, plus $11.3 million for 151 ½ years of simple interest at 5 and 6 percent.

The suit was dismissed by the court on the grounds that it was barred by the statute of limitations, but the judge also declared the 1875 amendment to be in violation of the U.S. Constitution’s barrier to any state making a law impairing the obligation of contracts. The dismissal was appealed to the state supreme court by the investors and Attorney General Mike Moore, who appealed to reverse the judge’s ruling declaring the 1875 amendment unconstitutional. In 1993, the Mississippi Supreme Court denied the appeal stating that “bond owners waited too long to challenge the state’s actions.”

He said that the statute of limitations ran out in 1880. As a result of the non-payment of the debt, Mississippi has never been given a bond rating in Europe.

The legal wrangling and economic turmoil were not the only crisis to be faced by Planters Hall. With the failure of Planters Bank, the banking complex was sold and renovated for use as a home in the 1850s.  Subsequently owned by Indiana McRae and Joseph Canizaro, Planters Hall was purchased by the Vicksburg Council of Garden Clubs which lovingly restored and maintained the main house.

The buildings were vacant for many years and just before rehabilitation was to begin in the 1990s the buildings burned and were demolished, a vacant lot remains.