Neshoba Central wears down, wears out Missy Gators in Class 5A quarterfinals 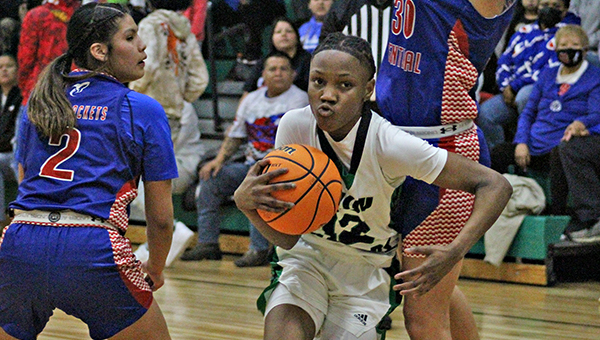 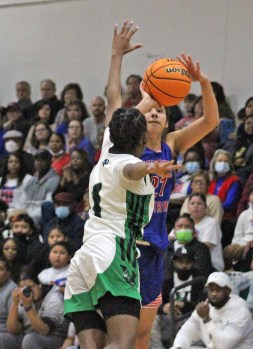 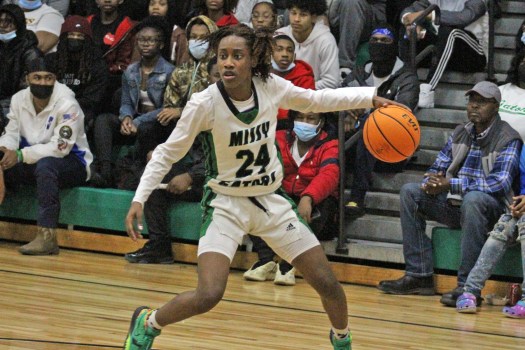 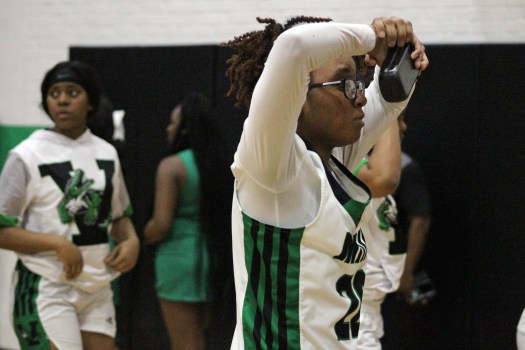 Vicksburg High's Destini Sims walks off the court after the Missy Gators lost 96-76 to Neshoba Central in the third round of the MHSAA Class 5A girls basketball playoffs on Friday. (Ernest Bowker/The Vicksburg Post)

When it comes to starting lineups, Vicksburg High coach Troy Stewart felt like his team was as good or better than top-ranked Neshoba Central.

The problem was that Neshoba’s second and third units are almost as good, and it’s a big reason why the Lady Rockets are heading to the Mississippi Coliseum for the second year in a row.

Undefeated Neshoba Central took advantage of its superior depth and plenty of foul trouble for the Missy Gators to dominate the last three quarters Friday night. After falling behind early, the Lady Rockets blew the game open in the third quarter and ended Vicksburg’s season with a 96-76 decision in the third round of the MHSAA Class 5A girls basketball state tournament on Friday.

By halftime, though, the negative side of the Missy Gators’ aggressive style started to show through. Starters Janiah Caples, Kierra James and Destini Sims all had at least three fouls by halftime. Leading scorer Layla Carter picked up her second in the second quarter as well, and spent most of it on the bench.

Neshoba Central shot 15 free throws in the second quarter. The Rockets only made eight, but it helped them climb back into the game and eventually carry a 40-38 lead into halftime.

“In an atmosphere like this, with everything on the line, I saw some nerves out of us in the first quarter,” Neshoba Central coach Jason Broom said. “We haven’t given up 26 points in a quarter all year and they jumped on us. We knew that quarter’s over and let’s play our normal defensive game.”

Things continued to unravel for the Missy Gators in the third quarter. Sims picked up her fourth foul a minute in and went to the bench. James got her fourth with 3:59 to go. Both players later fouled out.

Caples spent most of the third quarter on the bench after providing a spark with six points in the first half.

Hama’ya Fielder made three of the Rockets’ six 3-pointers in the third quarter, while Zharia Leflore and Carly Keats scored 10 points apiece.

Neshoba Central outscored Vicksburg 33-17 in the quarter to turn its slim two-point lead into a bloated 18-point advantage. The margin stayed around 20 points for most of the fourth quarter.

Vicksburg’s last lead was at 45-43, after Ja’Na Colenburg made a 3-pointer with just under six minutes to go. Neshoba Central answered with a 13-2 run to take firm control of the game.

Leflore finished with a game-high 28 points, while Fielder and Keats scored 17 apiece. Only two of Neshoba Central’s 31 wins have been by less than 10 points.

“I’ve told a lot of people if our first group is No. 1 in 5A then our second group is at least No. 5 or 6,” Broom said. “We know we can rest our starters, and if you’re trying to do the same thing then our second is better than your second.

That’s one of the benefits of having a lot of talented players on your team.”
Stewart said the foul trouble and depth caught up to the Missy Gators in a hurry. The seeds planted in the first half bore bitter fruit in the second. Neshoba Central outscored Vicksburg 57-29 in the middle two quarters.

“I saw it unravel in the second. The score got kind of lopsided in the third, but the second quarter was the turning point,” Stewart said. “When we had to sit ladies … and Neshoba didn’t outscore us, they were awarded free throws every single time down the floor. It walks you back in the game.”

Neshoba Central ended Vicksburg’s season for the second year in a row, in an early-round showdown many around Mississippi thought was between the two best teams in Class 5A. The Rockets advanced to the Class 5A semifinals for the second straight year and will play West Jones Tuesday at 5:30 p.m. in Jackson.

Vicksburg did beat Neshoba Central to reach the Class 5A semifinals in 2020, but after losing to them twice in a row Stewart did not mince words about his disappointment.

“I am tired of losing this game,” he said.

If there is a silver lining, it’s that this group of Missy Gators should be back in the championship mix next season. Sims, who scored nine points despite playing less than two minutes of the second half, is the only senior on the roster.

Carter, who led the Missy Gators with 24 points on Friday, is one of a number of returning juniors who will be seniors next fall. So is Caples, who scored nine of her 15 points in the second half while playing with four fouls. So is Colenburg, who scored 15 points. James, who had six points, is a sophomore.

Even though they didn’t win Friday, Stewart said he was proud of his team and excited about their potential in 2022-23.

“I wouldn’t take another team for the girls I have, to coach anybody,” he said. “This set of ladies right here, they’re worth millions.”