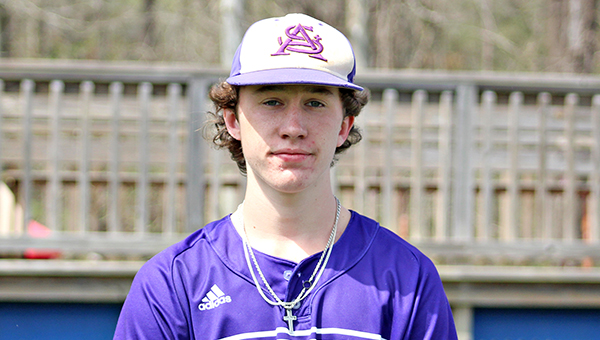 St. Aloysius baseball player Carter Magee went 2-for-3 with two RBIs and one run scored in a 5-4 loss to Jackson Academy on Saturday.

St. Aloysius’ two-game baseball road trip against Jackson-based MAIS powerhouses did not go the way it wanted to.

Cade Gadman hit an RBI single with two outs in the bottom of the seventh inning Saturday to give Jackson Academy a 5-4 walk-off victory over St. Al.

Chandler Anderson led off the seventh with a single for Jackson Academy (6-1), went to second base on a groundout, and scored on Gadman’s single to right field.

It was Gadman’s second hit of the game. He finished 2-for-3 with two RBIs and one run scored. He also hit an RBI single in the sixth inning as Jackson Academy scored two runs to tie the score at 4.

For St. Al (2-2), Adam Francisco had a big day by going 2-for-2 with two walks and a run scored. He also started on the mound and pitched five innings, allowing one earned run while striking out five.

Carter Magee went 2-for-3 with two RBIs and one run scored, and Barrett Shows hit an RBI single in the fifth inning.

Saturday’s game was St. Al’s second in a row against MAIS Class 6A opponents. It lost 13-3 to reigning Class 6A champion Jackson Prep on Friday before losing to Jackson Academy 24 hours later.

The Flashes will play at Copiah Academy Thursday at 6 p.m.

Morgan struck out eight of the nine batters he faced in his pitching stint, and had 28 of his 35 pitches go for strikes.

Hayes Hopkins added two hits, one RBI and one run scored for the Trojans, while Arnett Sevier was 1-for-2 with one RBI and a run scored.