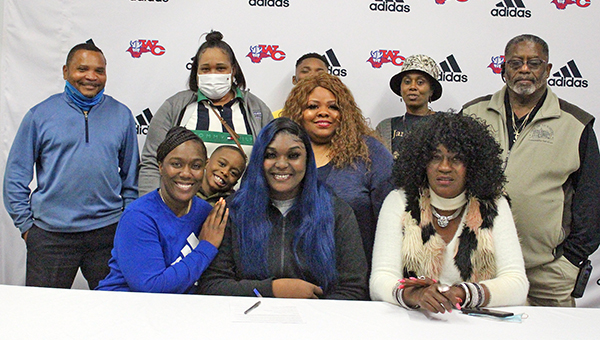 For the past three years, the easiest name for Darein Hilliard to write in the scorebook has been Zy Segrest.

The senior post player has been as reliable as she was productive, averaging a double-double for her high school career and making The Vicksburg Post’s All-County team in each of her first three seasons.

“She has been a starter for four years. I think she started every game except one,” Hilliard said.

Segrest is not done, either. On Friday she took the next step by signing with Mississippi Gulf Coast Community College to continue her basketball career.

Segrest revealed her choice in a signing ceremony in Warren Central’s football fieldhouse, taking off a black jacket to reveal a Gulf Coast T-shirt underneath.

She said she picked Gulf Coast ahead of offers from Copiah-Lincoln, Itawamba, and several other Mississippi junior colleges.

“I like the school, I like (MGCCC head coach Hope Adams) of course, and I like the team. They made me feel like I was at home, and that’s what I want,” Segrest said.

Segrest was blunt when asked what she’s bringing to the table for Gulf Coast.

Given her long track record, that’s no small contribution.

Segrest averaged 12 points, eight rebounds and three blocks per game as a freshman and never left the starting lineup. The 6-foot post player averaged 12 points and 10 rebounds this season — the second time in her high school career she averaged a double-double — and helped the Lady Vikes more than double their win total from the previous year.

“I got better each year,” Segrest said.

Hilliard praised Segrest’s leadership as much as her play on the court.

“That’s how teams thought that they could beat us, was to take her away. We found a way to get our most number of wins this season behind her, and her leadership. Probably the best thing about her is she turned into a leader for this team in a positive way,” Hilliard said. “She was big sister. I told her it was her team, and whatever you want to happen with this team is up to you. She took that to heart.”