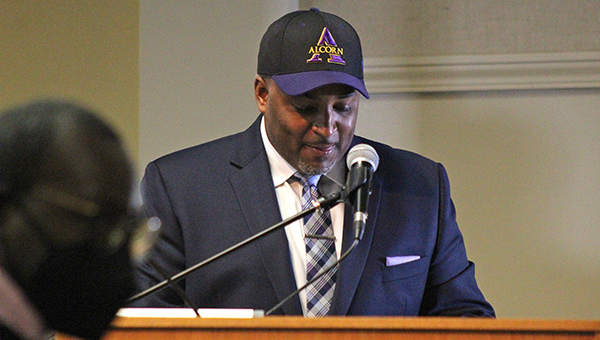 Raynoid Dedeaux was named Alcorn State’s new director of athletics Monday. Dedeaux served for 16 years in the Mid-East Athletic Conference in a variety of positions, including deputy commissioner. He is an Alcorn alum. (Hunter Cloud/The Natchez Democrat)

It was a job Dedeaux long dreamed of. When he was a student at Alcorn State, he had to write his bio and what he wanted to do in 20 years. He said he wrote the words “athletic director.”

“Twenty years later I’m here. It’s great. There are certain things in life that are defining. Marriage and the birth of your children. I put this up there,” Dedeaux said. “I’m filled with emotion. I told my wife as we drove here, I always got the same feeling before I played a game. I would be filled with butterflies. Once you get started, it’s on.”

Dedeaux will begin his duties April 1. He is currently the deputy commissioner of the Mid-Eastern Athletic Conference.

Nave said it was important to find a candidate who understood Alcorn’s rich 151-year-old history and could build upon its success. Additionally, the candidate had to be someone who could take the program to the next level.

Dedeaux checked those boxes. He is a 2002 alumnus of Alcorn State. He played football for the Braves and earned a bachelors in secondary education and a masters in athletic administration.

After graduation, he taught physical education at Blackburn Middle School in Jackson and coached track and football at Jim Hill High School. In 2004, he interned at the Mid-Eastern Athletic Conference for a year. He spent a year as Athletic Assistant Director for Compliance at Coppin State University in 2005.

He continued working his way up the ladder in the MEAC, eventually becoming the league’s director of championships in 2008 and the deputy commissioner in 2022. The latter position is the second-highest official in the MEAC.

His experience should help lead Alcorn State in a new era of college athletics.

“The game has changed and the playing field has shifted. We must look through a lens with an eagle eye focus to the future,” Nave said. “The new athletic director needed to have a record and commitment of putting the student athlete experience, health and well being at the center.”

In his 20 years working with the MEAC, Dedeaux helped secure a broadcasting deal with ESPN and another deal with Nike worth $12.5 million to the conference. One of his first responsibilities as Alcorn’s Athletic Director will be ensuring projected facility upgrades are completed.

Currently, Alcorn is working to upgrade its weight room, athletic training facility and the STAFF center used by Student Athletes.

Dedeaux said graduation, championships, student athlete well-being, athletic integrity and fiscal responsibility are the pillars for sustaining a successful athletic program. He said he commits to all five as the leader of Braves athletics.

Alcorn State will do this by competing for championships in the conference and nationally. They will aim to graduate 100 percent of student athletes. The current rate is 80 percent.

Dedeaux said he will commit to proper training, medical care and nutrition of athletes.

He will also be fiscally responsible and said he aims to bring more money into the athletics department through various sponsorships and partnerships.

He said several times during the interview process he was asked how he would sell Alcorn State.

“I thought about my dad. He was a car salesman, a very successful one. He told me, ‘Son, when you have a good product you don’t have to sell it,’” Dedeaux said. “Alcorn is a great product. Alcorn sells itself. I’m excited and ready to get to work. I want to build on Alcorn’s great history. I want to bring Alcorn to the next chapter of excellence. God Bless and Go Braves.”