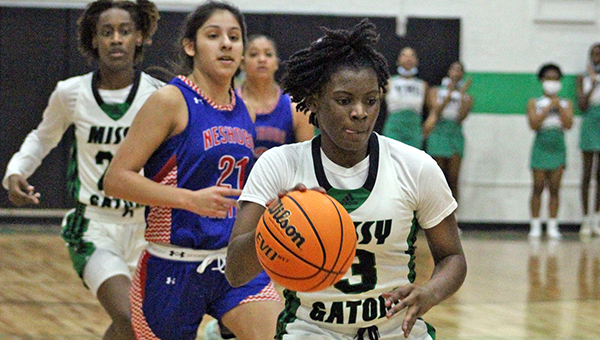 Vicksburg's Kierra James (3) brings the ball up the floor during a Class 5A playoff game against Neshoba Central on Friday. James is among more than a half-dozen starters and top reserves that will return for the Missy Gators next season. (Ernest Bowker/The Vicksburg Post)

He’ll give his players the week off, compile stats, watch some film and take a few days to assess his program, among other housekeeping items.

They’re all chores he would much rather have put off until next week.

Stewart’s Missy Gators had their season end with a 96-76 loss to Neshoba Central in the third round of the MHSAA Class 5A playoffs last Friday.

Stewart was disappointed but not discouraged with the loss. All but one player will return next season, meaning the Missy Gators’ championship window is still open.

“If we stay focused and keep this team together, keep this unit together and we work together, we’ll be the team everybody is looking to beat,” Stewart said after Friday’s game. “They can only get better. Even with this loss we had tonight, losing five games in a season ain’t that doggone bad.”

Vicksburg finished with a 21-8 record that included three COVID-related forfeit losses. It won its region tournament title for the third year in a row, but ran into top-ranked and undefeated Neshoba Central much earlier than it would have liked.

Neshoba Central (31-0) trailed by 10 points at the end of the first quarter, and then outscored the Missy Gators 57-29 in the second and third quarters as foul trouble and depth became an issue for Vicksburg.

Two Vicksburg starters fouled out, and two others finished with four fouls.

The Rockets won their 29th game this season by 10 points or more, and ousted Vicksburg from the playoffs for the second year in a row. It was the fourth time in five seasons that the teams have matched up in the state tournament, and Neshoba Central has won three of them.

“I am tired of losing this game,” Stewart said.

In defeat, Stewart was hopeful that the Missy Gators can take away some positives. Namely, the bitter feeling of losing.

“I’m not going to have to get them up to play this third-round game, if we get this far next year. That’s one positive,” Stewart said.

Other positives, he added, include the chance to learn and grow from the experience. The only senior on the roster is guard Destini Sims. The 2021 Vicksburg Post Player of the Year averaged 11.2 points, 6 rebounds and 2.5 steals per game this year.

“Destini Sims has been a godsend to coach, to mentor, to be around. She is just the perfect child. She’s an outstanding ballplayer. She’s got one of the highest IQ’s I’ve ever coached,” Stewart said. “She’s going to be really hard to replace.”

There are plenty of players capable of taking up the slack though.

Ja’Na Colenburg and Layla Carter both averaged in double figures in scoring, and Janiah Caples just missed the mark at 9.5 points per game. Those three players combined to score 54 of Vicksburg’s 76 points against Neshoba Central.

Several other key players like Kierra James and Kalia Bland will also return. Stewart said having so many experienced players back is a huge asset.

“We can refine things rather than teach things,” Stewart said. “Everybody we have now, if we keep them, they know what we’re running and all we have to do is refine and get better at those things. We’re excited.”
And confident.

Besides bringing back all of his best players, Stewart said many other top contenders will lose some of theirs. Neshoba Central is losing three senior starters.

That should be enough to take the Missy Gators from contender to favorite in the Class 5A championship picture.

“The seniors that are currently on everybody’s roster need to leave, and then we’ll be ready next year,” Stewart said. “I have one senior and the rest of my kids are coming back. We will be the senior group next year. In my eyes, we’re the team to beat — period.”