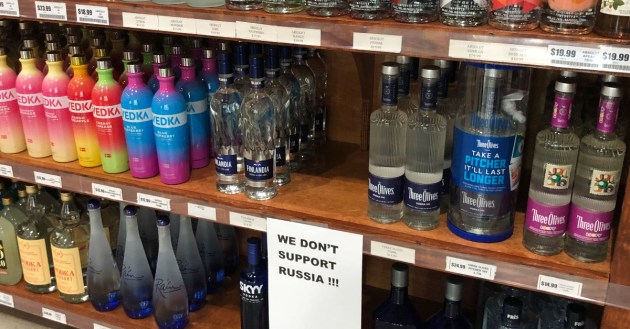 A sign in the imported vodka section of Toney’s Liquor reads, “We Don’t Support Russia!!!” The locally owned business chose to remove Russian Standard brand vodka from its shelves in protest of Russia’s invasion of Ukraine. (Photo by Anna Guizerix | The Vicksburg Post) 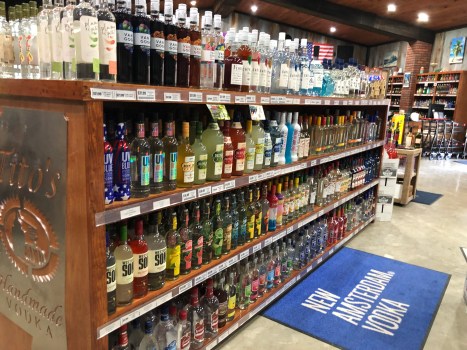 The Russian invasion of Ukraine has left many Americans wondering what they can do to take a stand.

In Vicksburg, liquor store owners Charles and Christin Toney chose a small gesture with a service-minded impact. Russian Standard brand vodka, the store’s only vodka made in Russia, has been pulled off the shelves.

“Stoli’s not made in Russia, Smirnoff’s not made in Russia. The only one we carried is Russian Standard,” Christin said. “It’s so funny, the people who are on social media saying, ‘This is stupid, you’re not hurting Russia,’ and they’re kind of missing the whole point. It’s just me saying that I don’t support Russia and I choose not to sell this vodka.”

By removing Russian-made products from its shelves, Toney’s Liquor, located on U.S. 61 North, is joining the ranks of liquor stores across the country — and even some states — that are no longer supplying Russian products. While some have been quick to criticize the decision on Facebook, Christin said she realizes not selling Russian vodka isn’t going to stop the invasion.

So, she decided to take things one step further.

“I’m selling the bottles, taking the money, doubling it and donating the proceeds to help Ukrainians, through SavetheChildren.org and International Rescue Committee,” she said. “It’s $400 that we get off the case of Russian Standard, and I’ll double that.”

Customers at Toney’s can also do their part by purchasing American-made vodkas, such as Texas-made Tito’s or Mississippi-made Cathead Vodka. In fact, the store carries more American brands of the clear elixir than imported varieties.

“Even the way that our vodka is arranged, I have an entire aisle that’s made in the United States, and then a small part of the opposite aisle is imported vodkas,” she said. “Everybody here in Vicksburg is supportive. They understand that we’re making a statement, and it’s our business.”

While the situation in Ukraine is ongoing, Christin said Toney’s customers can always count on her liquor store to support the United States, and she is thankful so many are supporting her family’s business as a result.