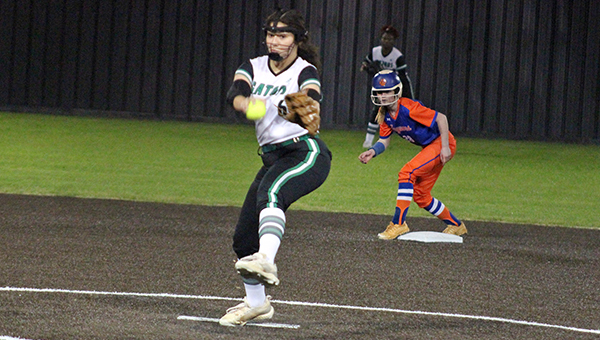 Every softball team goes through a slump at some point in the season. The Vicksburg Missy Gators are hopeful that they’re getting theirs out of the way early.

It was the the fourth straight loss for Vicksburg (0-4). In the last three it has had 12 hits and scored a total of two runs.

“We haven’t been hitting,” Vicksburg coach Brian Ellis said. “I don’t know how many (hits) we had tonight, but we’re not getting any hits and when we get the hits we’re not getting that hit right after it. It’s hard to get something started like that.”

The Missy Gators did not get on the scoreboard until the fifth inning of Tuesday’s game. Jordan Grace reached on a single and scored on another single by Trinity McGloster.

Madison Central led 9-1 at that point, however, and scored five more runs in the top of the sixth to finish the game via the mercy rule.

After a scoreless first inning, Madison Central scored in every other inning.

McGloster and Jordan Grace had two hits apiece for Vicksburg, which will try to stop its slump Thursday at home against Loyd Star.

“We hit all winter long. We can hit. We’ve just got to focus,” Ellis said. “We’re starting to second guess our swings and everything else while we’re at the plate. That’s all the stuff you do in practice for months. We’ve got to fine tune some things and find a way to get up to the plate and see the ball and hit it.”

Abby Morgan went 2-for-3 and drove in Warren Central’s only run with a single in the third inning. The Lady Vikes only had four hits.

Morgan also pitched 5 2/3 innings and had six strikeouts. She gave up seven runs, but only one was earned. Warren Central committed five errors.

Warren Central will play at Florence Thursday at 6:15 p.m.