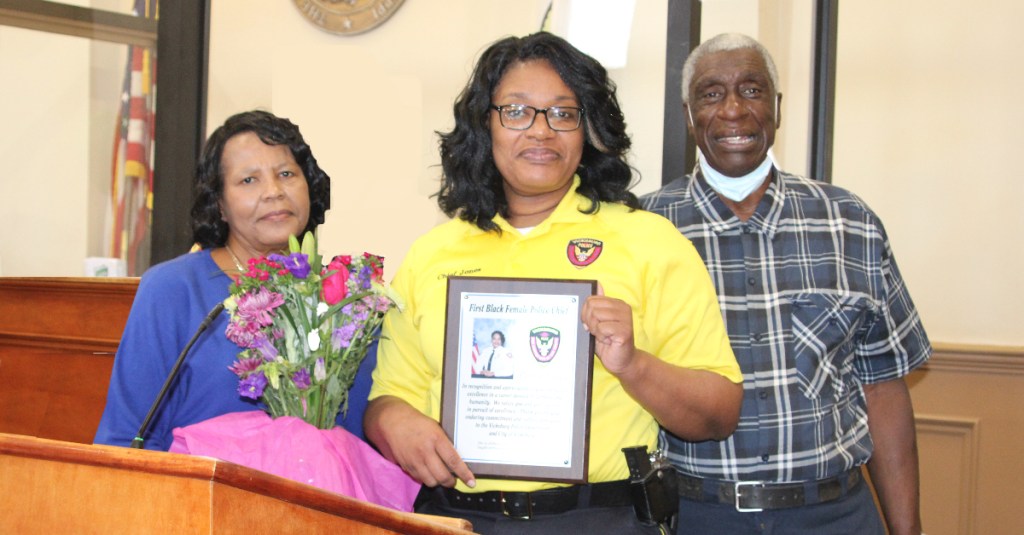 Vicksburg Police Chief Penny Jones, center, displays the plaque she received from police department and court employees at an appreciation reception Tuesday at the Municipal Court. Pictured with Jones are her mother, Patricia Jones, left, and father, Isiah Jones.

Penny Jones was sworn in as Vicksburg’s first female police chief in July 2021.

Seven months later, the Vicksburg Police Department and Municipal Court staff came together to show their appreciation for her work with a reception in the courtroom and the presentation of a plaque commending her for her efforts.

“I’m so thankful,” Jones said after the reception, adding it was good to see the support of her coworkers.

“On behalf of women in general, it feels good to know that you’re appreciated,” she added. “From this standpoint, especially in law enforcement, we have to work just a little bit harder to make ourselves recognized.”

During a short speech after receiving her plaque, Jones said, “I believe my work speaks for itself,” adding “there is more to come.”

Mayor George Flaggs Jr. said he had recognized Jones for some time.

“When I had the opportunity to recommend a police chief, a Black chief didn’t come to my mind, a woman chief didn’t come into my mind; I never thought about it,” Flaggs said. “What I wanted was somebody who could fit the description of what I thought a police officer should be.”

Flaggs said he thought about several issues as he tried to determine who would lead the department and serve with dignity and pride.

He also considered that Jones, while working, went back to school at Alcorn State University to get a bachelor’s degree and then a master’s degree in criminal justice.

“This day we celebrate this woman who just happens to be Black and just happens to be the police chief,” he said. “She was selected because she protects and serves with honesty, dignity, integrity and pride. She’s doing a great job and I was proud to make that recommendation.

Jones joined the police department in 1999 and worked her way through the ranks, becoming deputy chief in charge of patrol in 2019. Besides serving as deputy chief, she has served as a patrol commander, domestic violence officer, senior patrol officer, narcotics officer and criminal and crime scene investigator.

One of the first programs she developed after becoming chief was moving the police department’s mobile command unit to different neighborhoods in the city to provide a police presence and Operation Blitz, a program where areas of town are saturated by a team of officers to write citations, serve warrants and make arrests.