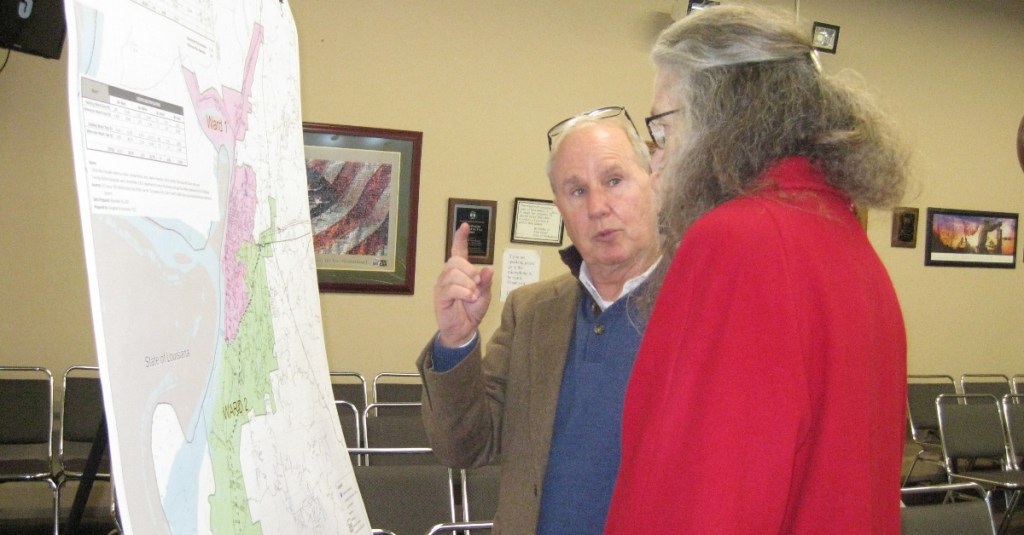 The city of Vicksburg could have its new ward lines for the 2025 municipal elections in place by Monday.

That’s when the Board of Mayor and Aldermen is expected to approve a districting plan setting new boundaries for the North and South wards, which will be renamed Ward 1 (north) and Ward 2 (south). The plan was discussed at a Feb. 25 public hearing where city maps featuring the new ward boundaries were displayed.

A map is presently on display in the foyer of City Hall to allow people to determine in which ward they live.

Mayor George Flaggs Jr. said during the public hearing the wards were renamed because they had an implication that reminded people of the Civil War.

One big change is the Ward 1 (North Ward) boundary, which stretches south to the north side of Interstate 20 and is bounded on the west by the Mississippi River and on the east by Wisconsin Avenue.

The boundary moves north along Wisconsin and then goes back west to a section of Halls Ferry Road, taking in Ken Karyl Avenue, Royal Street, Military Street, James E. Sturgis Sr. Street and Lane Street before meeting with Cherry Street.

Local and state governments are required to redistrict ward or district lines every 10 years if Census figures indicate a population deviation of more than 10 percent in the total population between the wards compared to an ideal, or equal, population to maintain federal one man, one vote requirements.

That ideal population for Vicksburg is 10,748.

According to the redistricting report from Slaughter & Associates of Oxford, the city’s redistricting consultant, the 2020 Census puts Vicksburg’s population at 21,573, or 2,283 less than the 2010 Census total of 23,856. The present population of the North Ward is 10,176, while the South Ward’s population is 11,391.

According to the consult’s benchmark plan, Vicksburg is 67.2 black and 28.2 percent white and the majority of the black population lives in Ward 1.

Because the deviation was above the 10 percent or less difference allowed by federal law, the city was forced to redraw the ward lines. Under the new plan, the ward lines were drawn so Ward 1 had 10,972 residents and Ward 2, 10,595, creating a deviation of 3.5 percent.

“The only way to comply with the Justice Department (requirements) to achieve the racial balance was to take Ward 1 further south,” Mayfield said.

Making the Chambers Street area part of Ward 2, he said, “Was the only way to get minority residents to achieve racial balance by picking up more Black population.

“Had it stayed in Ward 1, the balance would not have worked,” he said.

“At the end of the day, we have to be fair and equitable to everybody and if you look at the makeup it is really, because of the way the population of the city, it was kind of out of balance a little bit,” Ward 2 Alderman Alex Monsour said.

“We did the best job we could do; it’s really two areas that we moved. We were close to being out of compliance; the South Ward had a lot more numbers than what the government wants,” Monsour added. “If you look at it, the numbers are so close now and it was pretty close to where it would have been questionable.

“It really didn’t change Vicksburg that much; it just made it to where the numbers are almost identical in each of Ward 1 and Ward 2.”

Click here to view the city of Vicksburg’s redistricting map.