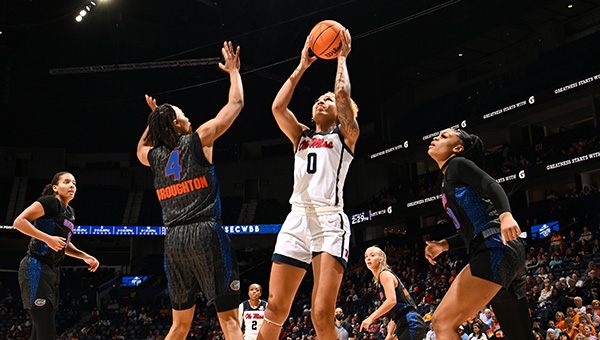 Ole Miss' Shakira Austin (0) takes a shot in the first half of an SEC Women’s Basketball Tournament game against Florida on Friday. Austin had 27 points, 13 rebounds, six blocks and four assists to lead Ole Miss to a 70-60 victory. (Todd Van Emst/Southeastern Conference)

Shakira Austin had a huge game with 27 points, 13 rebounds, six blocks and four assists to lead Ole Miss to a 70-60 win over No. 23 Florida in the quarterfinals of the Southeastern Conference Tournament.

Ole Miss (23-7) advanced to the semifinals for the first time since 1993. It will face top-seeded and No. 1-ranked South Carolina Saturday at 4 p.m. The game will be televised on ESPNU.

South Carolina routed Arkansas 76-54 in another quarterfinal on Friday. South Carolina is chasing its seventh SEC tournament title in eight seasons and third in a row.

Ole Miss is in the semifinals for the 10th time, but it has never won the SEC Tournament. Its last trip to the championship game was in 1983.

Austin had a season-high point total and her third double-double in six games.

Ole Miss only made one field goal in the last six minutes, but went 12-for-14 from the free throw line in that span to close out the game. The Rebels were 20-for-26 from the foul line in the game.

Angel Baker scored 15 points and Lashonda Monk had 11 for Ole Miss, which never trailed after taking a 4-3 lead 93 seconds into the game. Madison Scott had eight points and nine rebounds.