Ole Miss racking up runs, victories early in the 2022 season 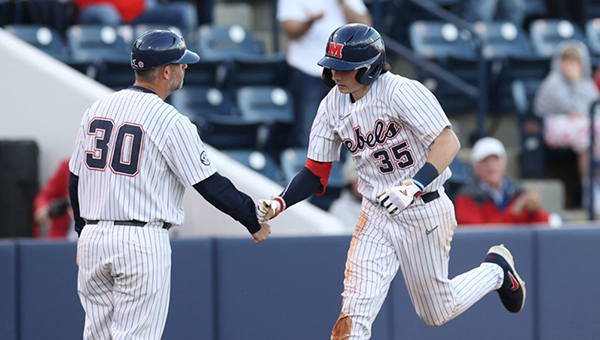 There are a handful of teams around the country, including a few in the Southeastern Conference, that have scored more runs than Ole Miss this season.

Not many have been as efficient with them.

It was the Rebels’ eighth win in a row to begin the college baseball season, and their fifth by the mercy rule that kicks in when a team is ahead by 10 runs or more after seven innings.

The five shortened games are the most for Ole Miss since 2015. That season, its fifth run-rule game wasn’t until May 12.

Wednesday’s game against Louisiana-Monroe (1-6) was scoreless through three innings, which was the longest Ole Miss has gone without scoring in any game this season. It hardly mattered.

Graham hit a grand slam in the fifth inning and Elko hit another in the sixth to make it 11-1. It was the first time since 1998 that the Rebels have hit two grand slams in one game.

The home run was Elko’s only hit of the game, but he finished with six RBIs after driving in runs with a groundout in the fourth inning and a bases loaded walk in the fifth.

Both Graham and Elko have four home runs this season, tied for third in the SEC.

Ole Miss has scored 10 runs or more in every game except the opener — when it scored nine — and has yet to bat in the ninth inning since all of its games have been at home. The seven consecutive games with double-digit run totals ties a school record previously set in 2006.

The Rebels will go on the road for the first time this weekend when they face Central Florida (7-1) in a three-game series in Orlando. It will be the toughest test yet for an offense that has been nearly unstoppable. UCF’s pitching staff ranks fourth in the country in team earned run average (1.00) and 13th in walks and hits per innings pitched (0.96).

“They’re ranked as high as they are for a reason. They’ve got almost their entire offense back from last year, who was one of the top 10 offenses in the country,” UCF coach Greg Lovelady said. “They’re scoring runs left and right. They’ve got a ton of power potential, they’ve got a ton of left-handers in the lineup. They can mix and match and move guys around, and bring guys in that will still hit home runs.”

Ole Miss and UCF played a weekend series in Oxford last season. The Knights took two out of three games, and Ole Miss needed to score three runs in the bottom of the ninth to get its one win.

Ole Miss is entering this series ranked No. 2 in the country in the D1Baseball.com poll, but Lovelady wasn’t expecting the Rebels to overlook his squad after last season’s experience.

“We’re not going to sneak up on them. We’re not walking in there with them not knowing who we are or what we’re about or what we can do,” Lovelady said. “They’re coming back wanting to beat us as payback for what we did last year, and they’re bringing their A-game.”