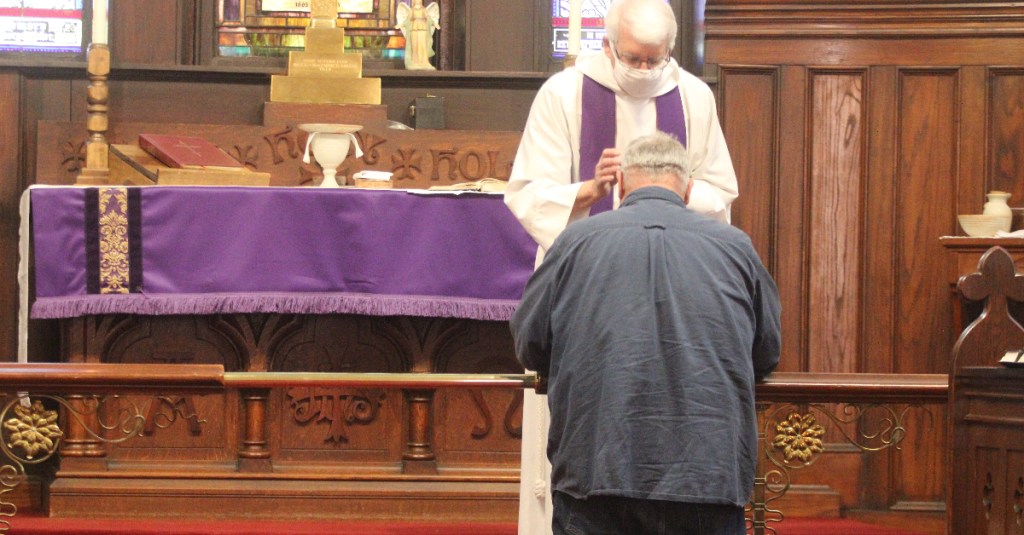 The Rev. Sam Godfrey, rector of Christ Episcopal Church, places ashes on a parishioner at Ash Wednesday services at the church. Ash Wednesday begins the 40-day season of Lent; a time of fasting and penance in preparation for Easter. (Photo by John Surratt | The Vicksburg Post)

Wednesday morning, Christians across the world began their preparations to celebrate the resurrection of Christ on Easter Sunday.

The Rev. Sam Godfrey, the rector of Christ Episcopal Church, said Lent gives people “a time to look inward and look outward looking toward God; orienting yourself to God and his calling to life.

The Lenten tradition of fasting and penance goes back to the earliest days of the Christian Church.

In the early days of the church, Malphurs said, Lent was a time when people prepared themselves for baptism and that time was also used to teach people about the faith.

“The 40 days became a time to prepare people to join the church through baptism and also to reconcile people who had just been away from the church,” she said. “Those practices became important, not just to the people but to the church as a whole because we all have a need to prepare for Easter and we all have a need from time to time to assess where we are in our walk with God and to take steps to change things that might be getting in the way of our relationship to God.

“We are not literally taking up our cross but we certainly want to remember everything that Jesus has done for us and we want to follow his model,” she added. “We’re not literally walking the way of the cross; we’re not literally going through the passion but we are called to look at Jesus’ life over the next 40 days and look at our own lives and kind of assess how we might turn ourselves more toward God and God’s intentions for us.”

The practice began in the Middle Ages, when Christians on pilgrimage to Jerusalem retraced Christ’s journey to Calvary, stopping at various locations along the way for reflection, prayer and meditation.

The devotion later spread to churches in Europe, where a series of 14 images or small crosses were placed on church walls and people would walk from station to station to pray and reflect on the place the image or cross represented.

The number of stations was established at 14 in the 18th century; Pope John Paul II established a 15th station in 2000 — the resurrection.

“I tell people Lent is a gift,” Godfrey said. “It’s always a gift when the church says take time to slow down and focus (on their relationship with God).”