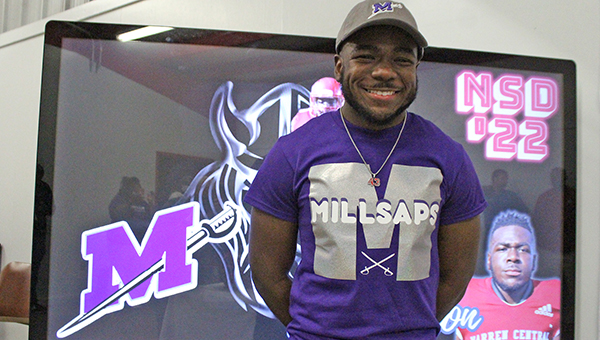 Warren Central football player Zion Nixon signed a letter of intent with Millsaps College on Monday. Nixon will receive a full academic scholarship and be a walk-on with the football team. (Ernest Bowker/The Vicksburg Post) 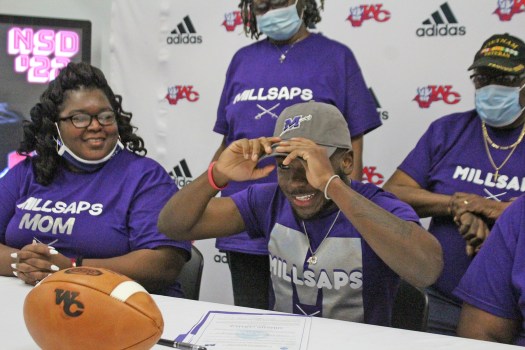 Warren Central football player Zion Nixon puts on a Millsaps College hat after signing a letter of intent with the school on Monday. Nixon will receive a full academic scholarship and be a walk-on with the football team. (Ernest Bowker/The Vicksburg Post) 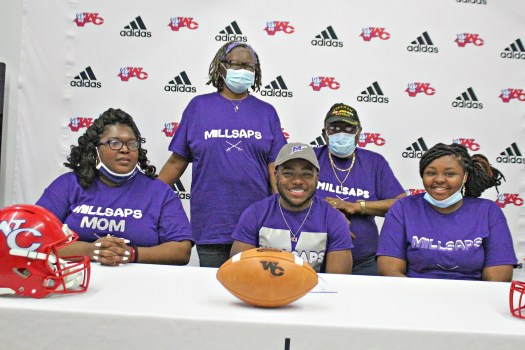 When he was preparing to make his college decision, Zion Nixon was one of Millsaps College’s most sought-after recruit. His numbers made their scouts drool and his upside is off the charts.

They seem to think he’s a pretty good football player, too.

Nixon, a senior running back at Warren Central, signed a letter of intent on Monday to play football at Millsaps. He’ll be a walk-on — Millsaps is not allowed to offer athletic scholarships as an NCAA Division III program — while attending the school on a full academic scholarship.

“It was all about opportunity. Millsaps was the only school that offered me an opportunity to continue my football career, so why not take it?” Nixon said. “I have a love for football. To be able to go to a school that is academically-driven and play football on top of that is a blessing.”

Nixon is the 12th member of Warren Central’s football program to receive a college opportunity. He’s also the most unlikely of the bunch.

Nixon was a team captain as a senior. He did not start a game, however, and only had two carries for two yards while mostly playing on special teams.

What he lacked in tangible production, coaches said, he made up for with leadership behind the scenes. Warren Central head coach Josh Morgan said Nixon’s presence was invaluable to the team’s success.

“He’s what you call the backbone. He’s one of the greatest examples I can think of of that,” Morgan said. “He played special teams and did whatever we asked him to do in the weight room, in the offseason, when we were in tough times when you need leadership. We would have been a much lesser team without him.”

Even if he wasn’t a superstar on the field, Nixon certainly was one in the classroom. His 4.1 GPA puts him in the top 10 percent of Warren Central’s senior class, and he scored a 21 on the ACT.

Those numbers, and not his 40-yard dash time or bench press reps, were what gained Millsaps’ attention.

“I got an email from Millsaps on an academic scholarship. They were like, ‘Hey, come on a tour of our school,’ and I said OK,” Nixon said. “Then the football coach texted me and asked if I was interested in playing football. I was like, ‘Absolutely.’”

Normally, a strong academic profile is a bonus for an athlete. Even Nixon admitted he was surprised that in this case it opened the door to continue his football career.

Nixon plans to major in either mechanical or electrical engineering at Millsaps.

“It blew me away that my grades and my academics would get me somewhere with football. It’s an amazing opportunity for me,” he said. “To be able to continue my football career for free, essentially, is a great opportunity for me and my family.”

Morgan said it’s a great — and unique — reward for a player who has worked hard both academically and athletically throughout his high school career.

“He has really set himself up and really earned this in a different approach. We’re super proud of him,” Morgan said. “It’s almost being a self-made man when you approach it like this, when you are hitting your grades and attacking it in a way that you love to see come to fruition.”

Nixon wasn’t sure exactly what Millsaps’ football coaches saw in him that led them to offer a spot on their team. He was just glad they did, and plans to make the most of it.

“Probably just my hard work and love for football,” Nixon said. “If you have a love for the game you can do anything you want to, no matter if you play or not. That’s how the football aspect came into it for me.”