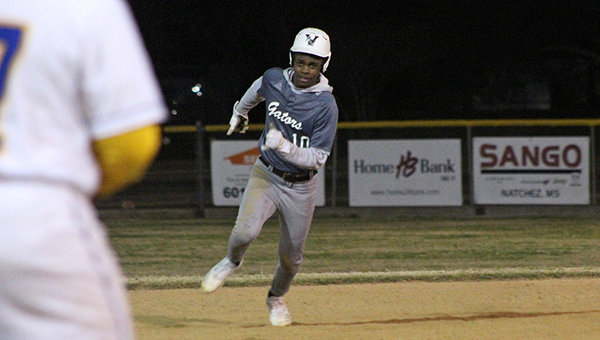 Vicksburg's Michael Johnson heads for third base during Monday's game against Natchez. Johnson walked twice, scored two runs and had one RBI to help the Gators to a 19-7 victory. (Hunter Cloud/The Natchez Democrat)

A new week began Monday, and the Vicksburg Gators stayed right in the comfortable groove they finished the last one in.

Tyler Carter doubled and scored four runs, Menser Minor went 2-for-3 with two RBIs and two runs scored, and Vicksburg scored 12 runs in the third inning on its way to a 19-7 run-rule rout of Natchez.

The Gators (7-2) ran their winning streak to five games. They’ve scored 78 runs in those wins, with double-digit totals in four of them.

The Gators fell behind 3-0 after one inning against Natchez, then took the lead for good with five runs in the top of the second. Four errors helped them score their runs without getting a hit, but they started smashing the ball in the third inning.

Three straight hits, including an RBI double by Carter and an RBI single by Decedric Brown, started the big third inning and put Vicksburg ahead 7-4. Minor delivered a two-run single later on, and Rashad McCroy had another RBI single on his second trip to the plate.

In all, Vicksburg had six hits and sent 18 batters to the plate during the big rally. A string of seven consecutive walks also helped things along.

Roderick Simpson went 2-for-2 with a triple and two RBIs for Natchez.

Vicksburg is scheduled to host Greenville Friday at 7 p.m.

Hopkins, Dee Morgan and Todd Etheridge split up the pitching duties in the five-inning run-rule victory. They combined to strike out 10 batters while walking none, and allowed three hits.

The Trojans had nine hits, with seven of the nine starters having one each. They also drew 11 walks — seven of which came during a 10-run rally in the third inning.