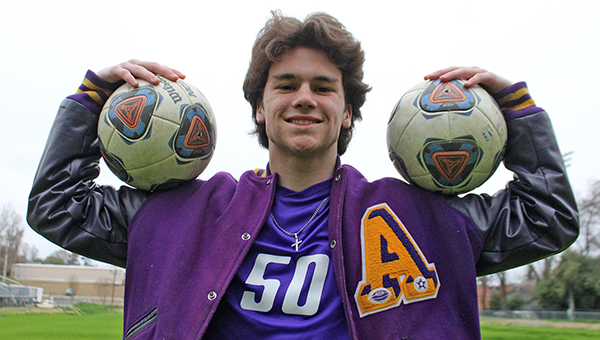 A few years ago, Cooper Madison found his passion for soccer fading.

The year-round grind of high school and club soccer was taking its toll. He was at an age where he was working hard but wasn’t quite skilled or experienced enough to break onto a varsity high school roster, and was getting frustrated.

A couple of moves changed all that. Madison took a break from his club team and transferred from Warren Central to St. Aloysius for academic reasons. At the same time, he came into his own as a player.

Three years later, he not only can’t imagine life without soccer, he doesn’t have to. The St. Al senior signed with Copiah-Lincoln Community College on Monday and will have a couple more years to play the game he loves.

“They always say the 1 or 2 percent or whatever, and I’m just happy to be in that,” Madison said. “It’s just a chance for me to keep doing what I love. And I’m not sure what I want to do yet, in the future. It’s keeping me in a direction where I don’t have to make any decisions and think I’m going to mess something up.”

Madison transferred to St. Al before his sophomore year. He immediately stepped into the Flashes’ starting lineup and became one of their best players.

Madison led the team in scoring each of the past three seasons. He’s totaled 74 goals and 25 assists in that span, and played in the MAIS All-Star Game last week.

He had a career-best 31 goals and seven assists this season while leading the Flashes to the MAIS Division II playoffs.

“A couple years ago I was not really enjoying the soccer stuff. I think it was when I came back to St. Al that I really found my love again for it,” Madison said. “It was just getting an opportunity. Being able to get on the field and have a spotlight on me.”

For all his success with St. Al, however, Madison didn’t get any college offers initially. He had to go to an ID camp at Co-Lin — effectively an open tryout — to get someone to take a look.

“I think it’s just playing at a small school and not getting the exposure,” Madison said.

“It put a smile on my face,” Madison said. “It was everything I thought it’d be. I was just really happy for myself.”
Madison’s father and coach at St. Al, Jay Madison, attributed the lack of college offers for his son to backing away from the club scene. In Mississippi, that’s often where college coaches do most of their scouting and recruiting.

He also said it should fuel Cooper’s drive as he heads to the next level.

“He was talking about it where he was getting burned out a little bit, so he stopped playing club soccer. A lot of coaches are just looking at club,” Jay Madison said. “I think it’ll put a little chip on his shoulder when he goes down there.”