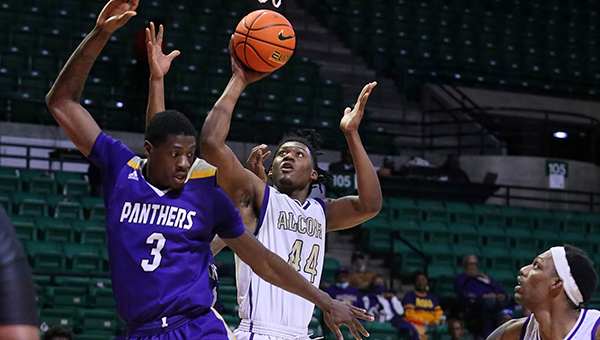 BIRMINGHAM, Ala. — Alcorn State spent the entire season living on the edge.

The Braves erased a six-point deficit in the last 2 1/2 minutes of regulation, and Justin Thomas made one of two free throws with 1.9 seconds left in overtime to give Alcorn a 64-63 win over Prairie View A&M in the first round of the Southwestern Athletic Conference men’s basketball tournament on Wednesday.

It was Alcorn’s 14th game this season that was decided by four points or less, and the ninth it has won. Alcorn is 3-1 in games decided by one point.

“When it gets tough, when it gets thick, (the players) are going to find a way to battle and find a way,” Alcorn State coach Landon Bussie said. “Every day is somebody different who comes to save us.”

Alcorn (16-15), the regular-season SWAC champion and No. 1 seed in the tournament, advanced to the semifinals on Friday at 8:30 p.m. It will play either Florida A&M or Alabama A&M, who play each other Thursday night.
Alcorn is chasing its first SWAC tournament championship and NCAA Tournament berth since 2002.

Alcorn and Prairie View (8-19) split two close games in the regular season, and their tournament rubber match followed the same pattern. The biggest lead for either team was eight points, and there were nine ties and five lead changes.

Prairie View took a 54-48 lead on a layup by Dewayne Cox with 2:28 remaining, but Alcorn scored the last six points of regulation. The run was capped when Thomas stole the ball and passed it off to Dominic Brewton, who drained a 3-pointer with 4.2 seconds to go.

With the game tied at 63 in the extra period, the Braves inbounded the ball with 22 seconds to go and held for the last shot. Thomas dribbled just inside the 3-point line and threw up an awkward jumper while drawing the foul.

Thomas hit the first free throw to put Alcorn ahead 64-63, then missed the second on purpose. Prairie View got the rebound and a timeout, but a 50-foot heave at the buzzer by Jawaun Daniels hit high off the backboard and missed.
Thomas was just 2-for-10 shooting from the field and finished with seven points, but had the one that mattered most. He also had four steals and five rebounds.

Darrious Agnew had a double-double with 13 points and 10 rebounds for Alcorn, and Byron Joshua also scored 13 points.

The three meetings this season between Alcorn and Prairie View were decided by a total of five points.

Jackson State had an eight-point lead late in the first half, and stayed in front until Texas Southern went on a 9-2 run midway through the second half. Walker made a jumper with 8:15 remaining to put Texas Southern ahead 43-41, and it never trailed again.

Yahuza Rasas had 10 points for Texas Southern (16-12). Brison Gresham added seven rebounds.
It was the final game for Jackson State head coach Wayne Brent. He announced last week that he is retiring after nine seasons with the program.

“I thought our guys came in and followed the game plan our coaches had for them,” Brent said. “We wanted to control the tempo, and they did a heck of a job of that. We went into the half up 33-28. Once we got to the last four or five minutes, we wanted it to be a one or two-point game. We thought it was anybody’s ball game in the last four minutes.”