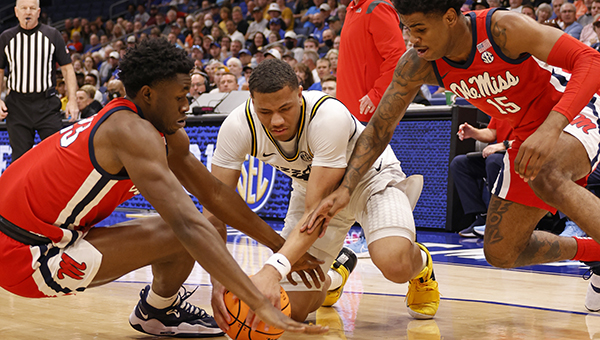 TAMPA, Fla. — It seemed like everything that could go wrong for Ole Miss’ men’s basketball team this season, did — right down to the end.

Kobe Brown scored 12 of his 16 points in the second half, when 12th-seeded Missouri pulled away to beat 13th-seeded Ole Miss Wednesday in the first round of the Southeastern Conference Tournament.

“Give Missouri a lot of credit, they played well all three times against us,” said Ole Miss head coach Kermit Davis. “I thought that we came out and our biggest lead was five with about maybe 5:30 to go in the first half, but then we’ve just been really challenged all year long with finishing halves and starting second halves, and that kind of reared its head up tonight.”

After a first half that ended 32-all — Ole Miss had the largest lead of five points — Missouri opened the second half with a 13-2 run. The lead reached 14 with 11 1/2 minutes remaining and stayed in double figures.

Ronnie DeGray III had three 3-pointers and 14 points, all in the first half, for Missouri. The Tigers shot over 50 percent in both halves, finishing at 54 percent, and had a plus-12 rebounding advantage.

“Great win for our guys,” Missouri coach Cuonzo Martin said. “It’s not easy beating a team three games in a row. A tremendous amount of focus. We held them to 60 points in three games, which is impressive with a team that scores and moves the way they move.”

Matthew Murrell scored 16 points and Jarkel Joiner had 13 for the Rebels, who finished the season on a five-game losing streak.

The Rebels were battered by injuries and bad luck despite flashes of brilliance. They took down No. 18 Memphis on Dec. 4 in the midst of a 9-4 non-conference season, and also beat a ranked LSU team on the road. They also lost three overtime games in conference play, including a 77-74 loss to South Carolina on a half-court buzzer-beater.

Season-ending injuries to freshman star Daeshun Ruffin and key veteran backup Robert Allen, in addition to a lengthy injury to Joiner, didn’t help matters. Several other players missed games here and there because of illness.

“You know, I think this is, I don’t know, 38 or 39 years in college basketball, and it’s probably the most uniquely challenged with some of the guys that we’ve lost,” Davis said. “Every loss is just excruciating to us and our players because it wasn’t — we envisioned us to be an NCAA Tournament team, and I still think that, no excuses, that we’re whole. I know we sure did not look like one tonight.”

Ole Miss is only poised to lose graduate transfer Nysier Brooks and John McBride, with the senior Joiner testing the NBA draft waters before deciding if he will forego his final year of eligibility.

“We’re going to work day and night to get this thing flipped next year, and they’ve given us every resource to be successful at Ole Miss, so it’s right on us,” Davis added. “We’re going to go out and put together a roster that the Ole Miss fans can be proud of, and we’re going to be right here next year hopefully playing for seeding in the NCAA Tournament.”