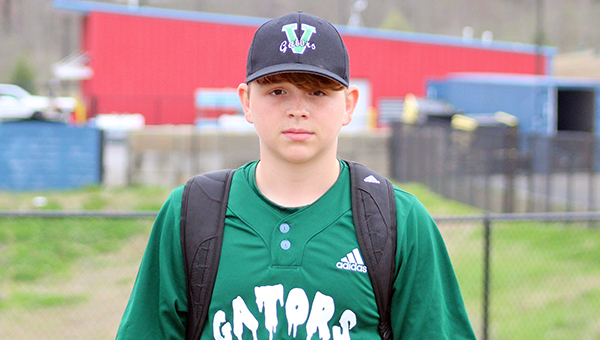 Vicksburg High baseball player Connor Harrigill had nine strikeouts in four innings, and also hit an RBI single in a 5-2 win over Greenville on Friday.

Vicksburg High’s explosive offense was kept in check Friday afternoon, but its pitching and defense made sure the Gators added another win to their total.

Connor Harrigill had nine strikeouts in four innings, and Vicksburg rode a big early lead to an abbreviated 5-2 victory over Greenville.

The game was shortened to five innings because of weather.

Chris Green drove in another run with a sacrifice fly for the Gators (8-2).

An error in the third inning led to two runs for Greenville (1-4), but otherwise the Gators’ pitching and defense were on point. Harrigill scattered four hits and a walk during his outing. Kaleb Doss pitched a scoreless fifth.

Germantown 8, Warren Central 1
J.P Robertson allowed two hits and one unearned run in six innings, and helped his own cause with an RBI single as Germantown defeated Warren Central.

Germantown scored three unearned runs in the bottom of the fourth inning, then added two more in the fifth on a single by Drew McCluskey to take a 7-1 lead.

Bo Broome drove in Warren Central’s only run with a sacrifice fly in the fifth inning. Seth Sterling and Jack Wright singled for the team’s two hits.

Warren Central will host Madison Central at 2 p.m. Monday, and East Rankin Tuesday at 11 a.m. in a pair of spring break matinees.

Manchester scored in all five innings of the run rule-shortened game, including six runs in the second inning and five in the fifth.

PCA (6-3) had seven hits, but left eight runners on base. Taylor Labarre went 2-for-3 with an RBI single, and Gage Palmer had two hits and scored a run.

Hayes Hopkins went 2-for-4 with three RBIs and two runs scored for the Trojans, and Dee Morgan scored twice.

Cole Boyte was 3-for-4 with four RBIs and two runs scored, and Wyatt Bedgood had two hits and scored twice.
The Trojans scored 11 runs in the first two innings and won for the second time in three games after losing three in a row.

Conner Gaul hit a three-run triple and scored on a single by Adam Francisco to stake St. Al to a 6-1 lead in the second inning. St. Joe chipped away at the deficit, however, and then had the big fifth inning to surge ahead for good.

Francisco had two hits and scored twice for the Flashes, and John David Liggett had two hits.

In game one of the doubleheader, Cooper Chaplain allowed one run and struck out seven in a complete game victory as St. Joe beat St. Al 3-1. Chaplain also hit a double and scored a run.

Smith’s RBI single in the bottom of the seventh inning brought in St. Al’s only run and got the tying run to the plate, but Chaplain worked out of the jam with a fielder’s choice and a double play ball.

Bulldogs bow out with tournament loss to Tennessee