Bulldogs bow out with tournament loss to Tennessee 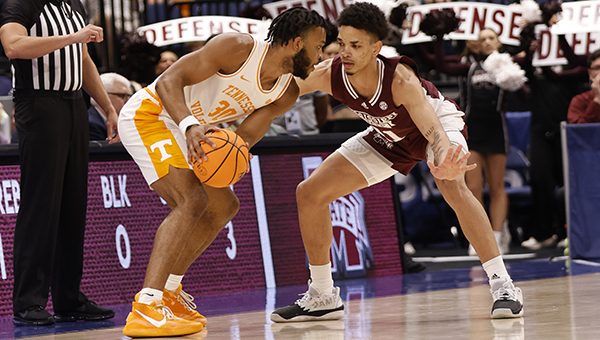 TAMPA, Fla. (AP) — Mississippi State had no more magic in the second half, and no more chance of making it to the NCAA Tournament.

Josiah-Jordan James led five players in double figures 16 points, 14 of them during a six-minute stretch in which ninth-ranked Tennessee pulled away to a 72-59 victory over Mississippi State in the quarterfinals of the SEC tournament on Friday night.

The Volunteers (24-7) won for the 10th time in 11 games to advance to Saturday’s semifinals against either No. 5 Kentucky. Texas A&M will play Arkansas at noon in the other semifinal.

Shakeel Moore led Mississippi State (18-15) with 15 points. Tolu Smith had 14 and Iverson Molinar, the SEC’s third-leading scorer, finished with 10 on 3-of-9 shooting. The Bulldogs missed 11 of 17 3-pointers and led only once — after scoring the first basket of the game.

“We absolutely want to continue to play if we’re invited to the NIT,” Mississippi State coach Ben Howland said. “Obviously, we wanted to be in the NCAA tournament, but it would be an honor to continue to play for our players and for our coaches. And so I hope that happens for us.”

Kennedy Chandler had 11 points for Tennessee despite missing time in the first and second half after suffering what appeared to be a right foot or ankle injury. He finished the game, though, making a layup for the final margin of victory.

James and Chandler were joined in double figures by Zakai Zeigler (11), Brandon Huntley-Hatfield (10) and Santiago Vescovi (10) for the Vols, who led 39-37 at halftime.

The 10th-seeded Bulldogs advanced to the quarterfinals with a 73-51 tournament-opening victory over South Carolina. They lost to Tennessee at home by 19 in early February and kept Friday’s game close until James led a surge that helped the Vols open a double-digit lead early in the second half.

James made his first five shots after halftime, four of them of 3-pointers. By the time Chandler returned to the bench after receiving attention for his injury a second time, Tennessee was up 13 and in complete control without the freshman guard.

Vescovi’s 3-pointer hiked Tennessee’s lead to 68-54 and the closest Mississippi State got over the final five minutes was 11.

“Second half, they came out and jumped on us at both ends of the floor,” Howland said. “Obviously, Josiah Jones hit four 3s I think in the first five minutes of the half. The second half, they were huge. That was a problem because James is such a good shooter, and we knew that.”