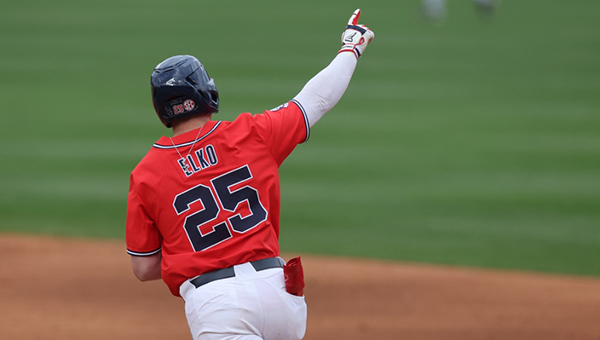 OXFORD — Ole Miss was back in the familiar environment of Swayze Field, and is back to its familiar pattern of knocking the cover off the baseball.

Tim Elko hit his second grand slam of the season and drove in seven runs as Ole Miss opened a three-game weekend series against Oral Roberts with a 16-2 victory on Friday afternoon.

Elko went 3-for-3. He singled in two runs in the first inning and another in the fourth before hitting his grand slam in the fifth that made it 14-2.

It was Elko’s second grand slam in six games, and his sixth home run of the season. It was part of a seven-run rally that blew the game wide open.

Reagan Burford also had a big day at the plate, doubling twice and driving in one run while scoring two.

Hayden Leatherwood had two RBIs and scored two runs, and Justin Bench was 2-for-3 with one RBI and two runs scored. The Rebels had 13 hits total.

Ole Miss starting pitcher John Gaddis allowed seven hits and three walks in five innings, but only two runs. He struck out seven batters and was credited with the victory.

Mason Nichols and Josh Mallitz each pitched two innings of scoreless relief to close things out. Mallitz had three strikeouts in his first game action this season.

Ole Miss and Oral Roberts will play again Saturday and Sunday, at 1:30 p.m. each day. Both games will stream on SEC Network+.